Calcium Dyes Past, Present and Future

A History of Calcium Indicators in Life Science

Calcium ions (Ca2+) play a crucial physiological role in the body: signalling, blood clotting, in cellular communication, as a messenger, and forming important relationships with proteins and regulators such as vitamin D and parathormone. As a key player in muscle contraction and neuron function, calcium ions have been the subject of thousands of research studies. This research has driven the need for accurate calcium indicators.

A History of calcium dyes

Scientists at the University of California Berkley developed the first fluorescein-based calcium indicator in the 1980s. This breakthrough meant intracellular calcium could be visualised and quantified. This quickly led to the advent of calcium probes such as Fluo-3 AM and Fluo-4 AM which are now widely used. These fluorescein-based acetoxymethyl (AM) esters are hydrophobic and will pass through the cell membrane easily. Esterases within the cell hydrolyse the esters soon after entering the cell which enables them to detect calcium. Fluo-3 and Fluo-4 bind to calcium and when shown a ~490 nm excitation light, they will fluoresce at ~ 520 nm signal.

Unfortunately, the new-found benefits associated with the use of fluorescein-based dyes arrived alongside some significant difficulties. The results obtained were difficult to read accurately because of high background fluorescence (‘noise’). Data analysis and bioassays with fluorescein-based dyes became problematic as the calcium probes created false signals, obscured significant results and hid true positives.

Calcium indicators have great importance in many fields of research. The issues caused by background fluorescence of Fluo-3 AM and Fluo-4 AM have been problematic enough to warrant much investigation. The results of extensive research indicate two probable reasons for the generation of this background noise:

To enable interpretation of the results of these bioassays, it is crucial to localise the calcium probe carefully and check that it is being transported efficiently.

Clearly, the issues with Fluo-3 and Fluo-4 as calcium indicators needed to be resolved. Researchers have suggested many possible solutions, one of which was to use Fluo-3 and Fluo-4 alongside the drug probenecid. Probenecid is used in the treatment of gout and hyperuricemia; it also prolongs the physiological effect of other drugs such as penicillin.  It is thought that its efficacy is due to its inhibitory effect on organic anion transporter activity within the kidney. This inhibition leads to retention of some compounds like pharmaceutical drugs, prolonging their efficacy. This same mechanism inhibits the organic anion transporter activity that is responsible for causing leakage of Fluo-3 and Fluo-4 from the cell. Using probenecid in conjunction with the Fluo-3 and Fluo-4 improves retention, thereby reducing background fluorescence. 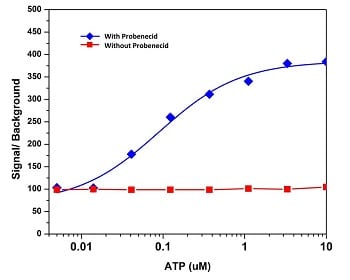 Fig. 1 ATP stimulated calcium response of endogenous P2Y receptor in CHO-K1 cells. 100 µL of 5 mM  Fluo-4 AM with (blue) and without (red) the presence of 2.5 mM probenecid

However, it quickly became apparent that this solution was less than perfect. Whilst it had the beneficial effects of reducing fluorescence, it couldn’t be ignored that it is a drug, therefore causing changes to normal cellular functioning. The precise effects on the cell weren’t clear, neither were the implications of those effects to results. This indicated the need to impose additional controls such as probenecid dose, making it a less viable option.

The Future of Calcium dyes

Step 1. To improve localisation and cellular retention.  Firstly, changes were made to the molecular structure of Fluo-3 and Fluo-4, thereby changing chemical properties that would make the AM ester bond far more stable. The result was a greatly reduced incidence of hydrolysis when in solution to improve cell loading. The changes enhanced cellular retention as well as improving localisation.

Step 3. Scale of production The manufacturing process was fine tuned to ensure the best quality calcium indicator compounds could be produced efficiently, representing good value for the researcher in every respect.

Cal-520® AM is a dramatic improvement on existing calcium dyes. Cal-520 benefits include: 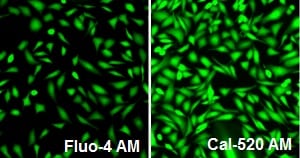 The result provided by Cal-520 AM is significantly lower background fluorescence as well as a greatly improved signal to background ratio. Researchers will also find that Cal-520® AM maintains the spectra seen from Fluo-3 and Fluo-4, this enables the transition from the Fluo-3 AM and Fluo-4 AM compounds to the Cal-520® AM compound with no need to alter equipment used. 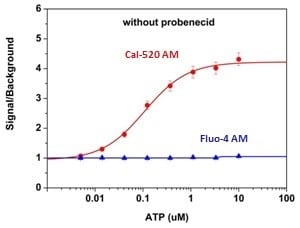 The Cal 520® AM has also been adapted for use in multiplexing. 590TM AM and Cal-630TM AM compounds have been created for longer wavelengths. These compounds are equally as reliable and are compatible for use with green fluorescence indicators such as GFP.

Cal-520® AM is an excellent probe for use with fluorescence-based assay detection of intracellular calcium mobilisation. IT allows easy analysis and quantification of GPCR and calcium channel targets and enables screening of agonists and antagonists. Cal-520® AM can be used with fluorescence spectroscopy, fluorescence microscopy, fluorescence microplate platform and flow cytometry. Its applications in the field of research are varied and increasing as its qualities are being realised: neurobiology, cardiology and cell signalling included. Cal-520®AM is proving extremely valuable in a growing number of research areas, it’s applications in the study of intracellular calcium

Stratech Scientific have been providing dyes and probes for assay and test research for several years. We are pleased to include the product range from AAT Bioquest focusing on photometric detection enabling biomedical researchers to obtain an improved understanding in the research areas of molecular biology, cell biology, immunology and biochemistry.