Actin is a highly conserved family of proteins that form microfilaments. Due to its intracellular abundance in eukaryotic cells, well within micromolar concentrations, actin participates in the most protein-protein interactions than any other known protein. Fluorescent derivatives of phalloidin have turned out to be enormously useful in localizing actin filaments in fixed cells and tissues, as well as, for visualizing individual actin filaments in vitro.Fluorescent phalloidin derivatives have been used as an important tool in the study of actin networks at high resolution.

Actin possesses a unique ability to dynamically polymerize into filamentous actin (F-actin) from its monomeric state. Interactions between F-actin and regulatory proteins such as actin-binding proteins rapidly assemble and disassemble actin filaments organizing them into actin bundles and cytoskeletal networks. These higher-order structures provide the mechanical and structural support essential for a multitude of cellular processes including intracellular transport, cytokinesis, cell motility, polarity and cell shape, gene regulation and signal transduction. Because actin is essential in so many biological processes, tools (actin-specific antibody and phalloidin derived stains) for the visualization of these actin structures are essential in research.

F-Actin stains are commonly used to characterize the stucture and functionality of the cytoskeleton. Because the actin cytoskeleton is a very dynamic and labile structure in living cells it typically requires either cold methanol or paraformaldehyde fixation prior to labeling actin. In fixed cells, actin structures can be visualized by actin antibodies, fluorescent phalloidin, or electron microscopy. Antibodies recognize both monomer and polymer (filamentous or F-actin) actin and hence tend to have a high background compared to probes that bind only F-actin. Correctly designed fluorescent phalloidin only binding to the native quaternary structure of F-actin and therefore have a low background.

Phalloidin, the main representative of the phallotoxin family, is a bicyclic heptapeptide isolated from the poisonous death cap mushroom, Amanita phalloides. It possesses a high binding affinity for the grooves between F-actin subunits over monomeric G-actin. Compared to actin antibodies, non-specific binding of phalloidin is negligible, thus providing minimal background and high-contrast during cellular imaging. Once bound to F-actin, phalloidin shifts the equilibrium of monomers and filaments toward the filaments position, and inhibits ATP-hydrolysis. The interaction stabilizes actin filaments by preventing subunit dissociation, and it promotes actin polymerization by lowering the critical concentration. As a consequence, these characteristics have made phalloidin derivatives useful stains in visualizing F-actin and cytoskeletal networks.

Phalloidin derivatives are water soluble and when used at nanomolar concentrations can selectively stain F-actin. Unlike some antibodies against actin, phalloidin’s capacity to bind more tightly to actin filaments over monomers decreases non-specific staining and background noise, producing better contrast between stained and unstained areas. In comparison to antibodies, phalloidin derivatives’ are small 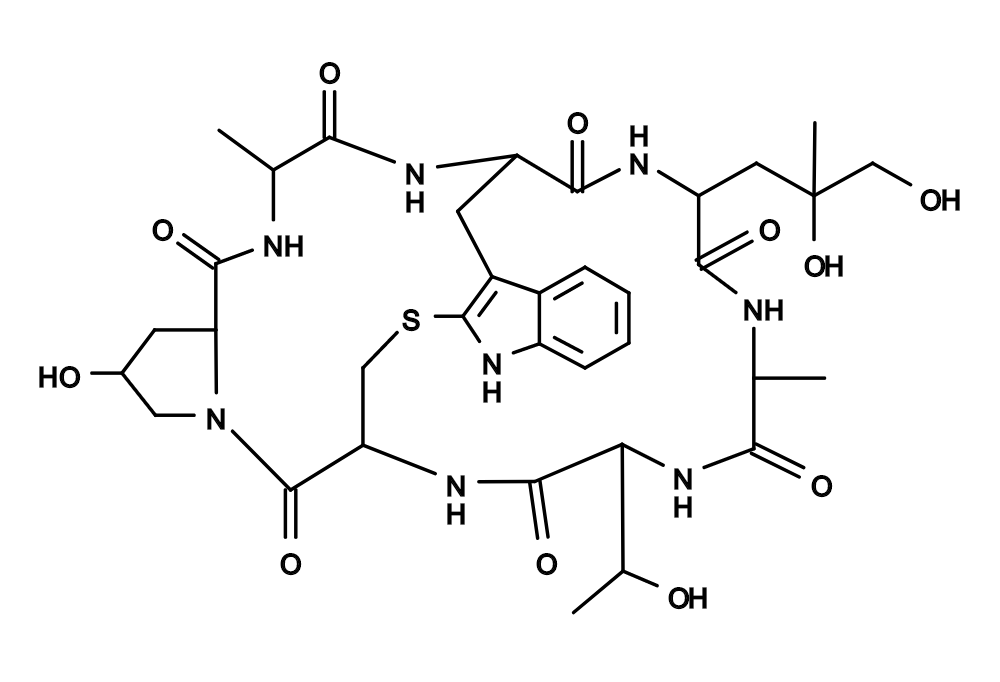 Biotinylated phalloidin provides and indirect method for visualizing and quantitating actin filaments. It requires the use of a fluorescent or enzyme-conjugated avidin or streptavidin for visualization. Whilst indirect detection offers the benefit of signal amplification, the need for additional reagents increases costs and assay time. Additionally, when staining with biotinylated phalloidin a higher concentration of the phalloidin conjugate is required, approximately two-fold more than needed with fluorescent phalloidin. Regardless of the inconveniences, biotinylated phalloidin are favorable for pull-down and immunoprecipitation assays for investigating protein interactions and colocalization with F-actin.

Fluorescently-labeled phalloidins are designed to investigate F-actin distribution in fixed and permeabilized cells. Compared to actin antibodes, fluorescent phalloidin conjugates are substantially smaller. This small size permits much denser labeling of F-actin which allows for the capture of more detailed images at higher resolutions.

Exploiting the excellent fluorescence properties of our iFluor™ dyes, AAT Bioquest has developed a series of phalloidin conjugates spanning the full color spectrum which selectively bind to F-actins. Used at nanomolar concentration, these iFluor™ phalloidin derivatives are convenient for many actin-related assays. Such assays include labeling, identifying, and quantitating F-actins in formaldehyde-fixed and permeabilized tissue sections, cell-cultures, or cell-free experiments. Compared to traditional fluorescein isothiocynanate (FITC) and rhodamine conjugates, Phalloidin-iFluor™ conjugates offer F-actin stains that are superior in brightness and photostability. Phalloidin-iFluor™ conjugates are equivalent, and in most cases superior, to Alexa Fluor® conjugates in performance. 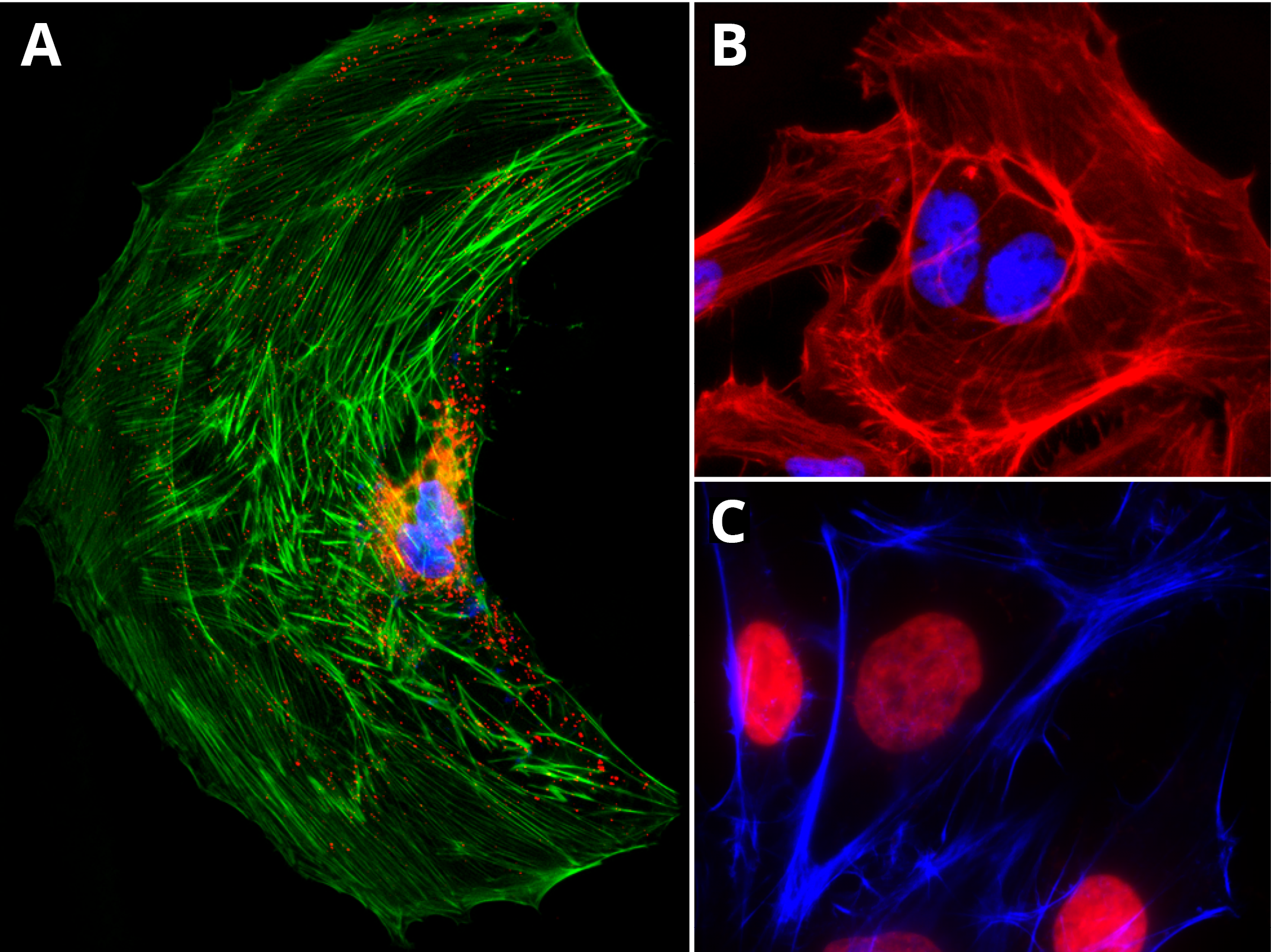 It is important to note that phalloidin is toxic, although the contents present in each vial are potentially lethal to a mosquito (LD50 of phalloidin = 2 mg/kg), it should always be handled with care.