Cell proliferation is described as an increase in cell number in any given tissue in vivo or cell culture plates in vitro. Cells proliferate themselves, in their favourable conditions, by a process known as Cell Cycle. Cell cycle is defined as an event that takes place in cells, where one cell divides itself into two daughter cells. The event as a whole is mainly divided into several phases such as Gap1 (G1) phase, Synthesis (S) phase and Gap2-Mitosis (G2-M) phase. During G1 phase, cells gather enough building blocks to be able to make DNA in S phase as well create enough energy so it can sustain once they divide themselves and be able to start all over again. In G2-M phase, cells verify the DNA generated in S-phase and if everything is verified, it moves forward and divides itself into two daughter cells, dividing the content in exactly half. Cell cycle is very tightly regulated process where if any process goes wrong, it just halts the cell cycle progression. If the damage is repairable then cells try to activate the pathways that fixes the damage or if the damage is not salvageable then it does activate the apoptotic machinery to kill the cells so no anomaly spreads towards new cells generated through cell cycle process. 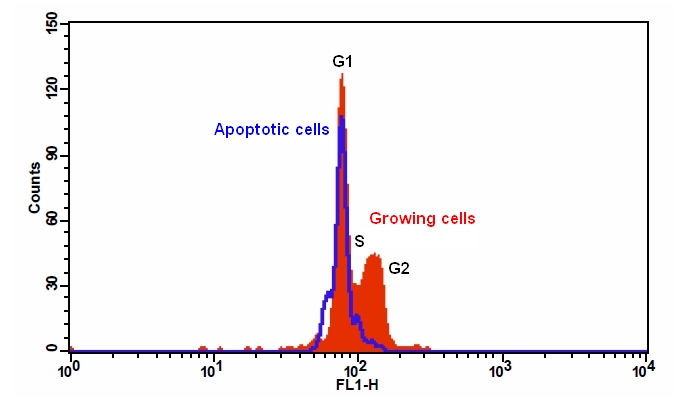 Figure 1. Jurkat cells were treated without (red) or with 20 ?M camptothecin (blue) in a 37 oC, 5% CO2 incubator for about 8 hours, and assayed with Cell Meter™ Fluorimetric Cell Cycle Assay kit (Cat# 22841) according to the kit instruction. The fluorescence intensity of Nuclear Green™ LCS1 (Component A) was measured with a FACSCalibur™ flow cytometer using the FL1 channel. In growing Jurkat cells, nuclei stained with Nuclear Green™ LCS1 showed G1, S, and G2 phases (red). In camptothecin treated apoptotic cells (B), the fluorescence intensity of Nuclear Green™ LCS1 was decreased, and both S and G2 phases were diminished.

Cell proliferation analysis is a very important aspect for drug development and other biological processes such as measuring compound toxicity, determining the inhibition of tumor cell growth in research. Most cell proliferation assays are developed around measuring the DNA content or analysing cellular metabolism parameters.

At AAT Bioquest, we have unique set of assays that covers both to accurately measure cell proliferation. Some assays are also designed to assess the growth of cell population or detect the generation of daughter cells. Upon combining the cytotoxicity tests, these cell proliferation assays could be a very useful tool to assess normal cell health, to measure responses to toxic insults or for prognosis or for diagnosis in several cancers. 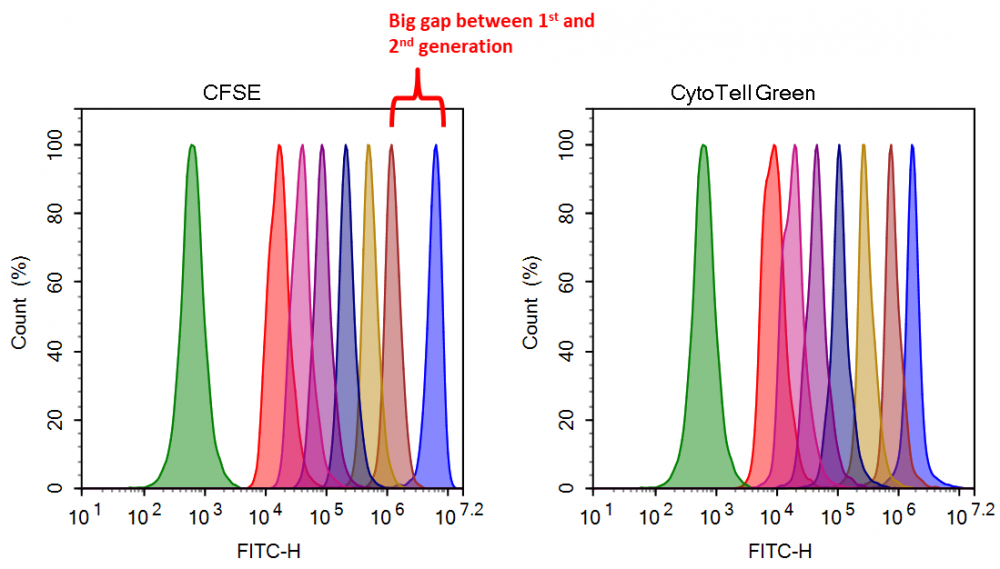 Figure 2. Cell proliferation assay with CytoTell™ Green and CFSE. Jurkat cells (~2×106 cells/mL) were stained with CytoTell™ Green or CFSE on Day 0. The cells were passed serially at 1:1 ratio on the day specified. Fluorescence intensity was measured with ACEA NovoCyte 3000 flow cytometer in FITC channel on the day of passage. Successive generations were represented by different colors.