The parameters that define cell viability, such as the integrity of cell membranes and the activity of cellular enzymes like esterases, can individually or together form the basis of an assay to distinguish between live and dead cells. Specially designed fluorescent cell viability indicators have been developed to provide a visual readout of cell health using a fluorescence microscope, microplate reader, or flow cytometer.

The non-fluorescent acetomethoxy derivate of calcein (calcein AM, AM = acetoxymethyl) is often used as an indicator for live cells in biology. The dye gives out strong green fluorescence once the acetomethoxy groups are removed by active intracellular esterases. Only live cells are labeled and detected because dead cells lack active esterases. Meanwhile, cell-impermeable DNA-binding dyes are commonly used to identify dead cells, which can freely cross the compromised cell membrane and stain nucleus DNA. A healthy living cell with an intact cell membrane, however, will exclude the dye from inside of the cell, leading to a negative signal. Additionally, amine reactive dyes are popular as fixable staining labels, which also works on the principle of cell membrane integrity. Dyes can cross the cell membrane and react with amines throughout the dead cell, giving out bright fluorescence. A much dimmer fluorescence would be observed for live cells who have only limited amounts of amines on the outside of membrane.

Live or Dead™ Cell Viability Assay Kits use two fluorogenic indicators. Live or Dead™ Cell Viability Assay Kit *Green/Red Dual Fluorescence* uses calcein AM for viable cells and a cell-impermeable DNA-binding dye for the cells with compromised membranes. Cells grown in black-walled plates can be stained and quantified in less than two hours. The assay is more robust and accurate than the other viability assays. It can be readily adapted for high-throughput assays in a wide variety of fluorescence platforms such as microplate assays, immunocytochemistry and flow cytometry. The kit provides all the essential components with an optimized assay protocol. It is suitable for proliferating and non-proliferating cells, and can be used for both suspension and adherent cells.

Live or Dead™ Cell Viability Assay Kit *Red/Blue Dual Fluorescence* uses two fluorescent indicators: Cellbrite™ Orange (Ex/Em = 550/570 nm) for viable cells and a cell-impermeable DNA-binding dye Nuclear Blue™ DCS1 (Ex/Em = 360/450 nm) for the cells with compromised membranes. Cells grown in black-wall plates can be stained and quantified in less than two hours. The assay is more robust and accurate than the other viability assays. It can be readily adapted for a wide variety of fluorescence platforms such as microplate assays, fluorescence microscope, and flow cytometry.

Our Live or Dead™ Fixable Dead Cell Staining Kits are a set of tools for labeling cells for fluorescence microscopic investigations of cell functions. The effective labeling of cells provides a powerful method for studying cellular events in a spatial and temporal context. 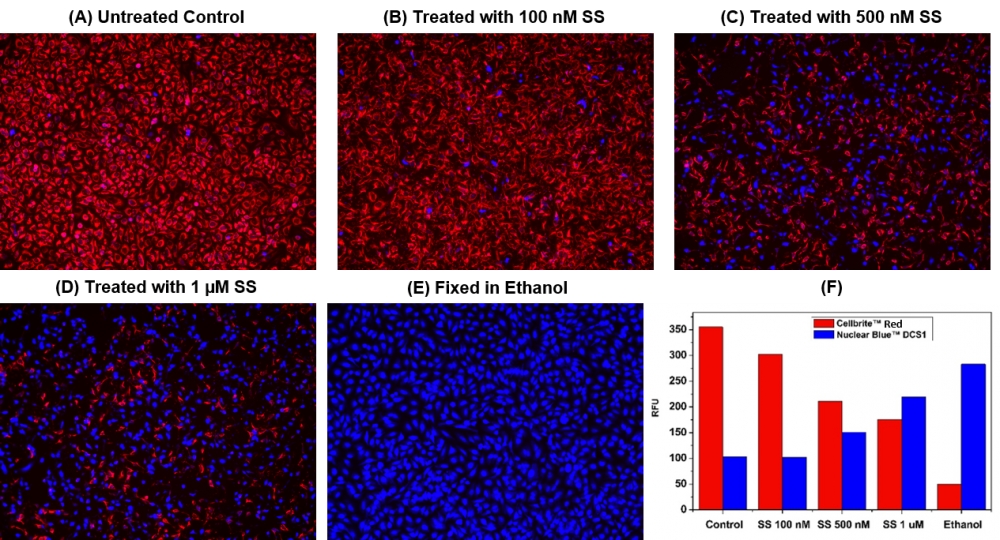