In viral diagnostics, nucleic acid amplification tests, such as reverse transcription polymerase chain reaction (RT-PCR), permits the early detection and identification of infectious diseases known as retroviruses. In this modified version of the standard PCR process, mRNA, which serves as the initial template, is first reversed transcribed to complementary DNA (cDNA) and then subsequently amplified via PCR for downstream analysis. Relative to other techniques for measuring mRNA, such as Northern blot analysis, RNAse protection assays, or in situ hybridization, RT-PCR is significantly more robust at detecting the RNA transcript of any gene regardless of its relative abundance. RT-PCR has become an instrumental diagnostic tool for the detection of pathogens, including influenza viruses, enteroviruses, coronavirus (SARS-CoV-2), Ebola virus, and HIV.

A retrovirus is a type of virus whose genetic material is encoded in RNA. Similar to other viruses, retroviruses hijack the cell’s machinery in order to replicate copies of themselves. Upon infecting a cell, the retrovirus utilizes its own reverse-transcriptase enzyme to generate double-stranded DNA from its RNA genome. The newly synthesized viral DNA is integrated into the host cell genome, and the virus thereafter replicates as part of the host cell’s DNA.

In humans, many retroviruses cause serious diseases. Retroviruses such as HIV-1 and HIV-2 cause the disease AIDS, while the human T-lymphotropic virus causes leukemia (i.e. cancer of the blood) and demyelinating disease. The severity of such diseases and the constant threat of new emerging infectious diseases has reaffirmed the need for developing rapid diagnostic tools capable of detecting low-density infections. One of the most well-established tools for the early detection of retroviral infection is nucleic acid amplification testing.

Reverse transcription polymerase chain reaction (RT-PCR) is a highly sensitive technique for the detection and quantitation of mRNA expression levels. In RT-PCR, the RNA template is first reversed transcribed into complementary DNA (cDNA), using the enzyme reverse transcriptase. This RNA-dependent DNA polymerase, with the assistance of reverse transcription primers, deoxynucleotides (dNTPs: dATP, dTTP, dGTP and dCTP), catalyzes the synthesis of cDNA from its respective target RNA sequence. The cDNA is then used as a template for exponential amplification using standard PCR procedure (denaturation, annealing and elongation). RT-PCR is used in a variety of applications including gene expression analysis, microarray validation, pathogen detection, and disease research.

Table 1. Deoxynucleotides (dNTPs) for use in PCR, real-time PCR, and reverse transcription PCR

End-point RT-PCR analysis, which is based on the plateau phase of PCR reaction, is used to analyze amplified products after all the cycles of the PCR reaction have been completed. In this method, amplicons are separated by agarose gel electrophoresis and visualized using a DNA binding dye, such as ethidium bromide (EtBr), to determine the size of the DNA molecules in the range of 500 to 30,000 bp. While EtBr is the most commonly used dye for visualizing DNA, it is mutagenic and highly toxic through inhalation. Instead, consider using safer and more environmentally friendly, non-toxic alternatives such as Gelite™ X100 (Cat No. 17706), Helixyte™ Green (Cat No. 17590), Helixyte™ Gold (Cat No. 17595), Gelite™ Green (Cat No. 17589) or Gelite™ Orange (Cat No. 17594).

In quantitative RT-PCR (RT-qPCR), fluorescent DNA-intercalating dyes or sequence-specific fluorescent probes are integrated into the RT-PCR reaction allowing for amplicon concentration to be measured in real-time during the exponential phase of PCR. By combining amplification and detection into a single-step, RT-qPCR provides greater precision and accuracy and produces quantitative data with a dynamic range several orders of magnitude larger than end-point RT-PCR. Because of its higher sensitivity, RT-qPCR is routinely used to analyze mRNA in gene expression, to examine the presence of retroviruses and to validate results obtained by array analyses.

RT-qPCR using fluorescent DNA-intercalating dyes, such as Helixyte™ Green (Cat No.17591) provides the easiest and most economical method for detecting and quantitating PCR amplicons in real-time. Helixyte™ Green binds to double-stranded DNA (dsDNA), and when excited emits light. As amplicon concentration increases with each successive cycle of amplification, so does the fluorescence intensity of Helixyte™ Green, to a degree proportional to the amount of dsDNA present in each PCR cycle. Helixyte™ Green is a much safer alternative than the highly mutagenic EtBr and can be used to monitor the amplification of any dsDNA sequence with greater sensitivity and less PCR inhibition. Because DNA-intercalating dyes will bind to any dsDNA, such as primer-dimers and non-specific products, it is important to use well-designed primers to avoid amplifying non-target sequences. To ensure amplification specificity and to check for primer-dimer artifacts, a melt curve analysis should be performed post-amplification.

In probe-based RT-qPCR, fluorescently-labeled, target-specific probes are used to measure DNA amplification in real-time. This method benefits from extreme specificity and affords the end-user the opportunity for multiplexing multiple targets in a single reaction. Of the many probe-based RT-qPCR chemistries available, TaqMan® probes and Molecular Beacons, are the most widely used and both depend upon Förster Resonance Energy Transfer (FRET) to generate a fluorescence signal. TaqMan® probes rely on the 5′-nuclease activity of Taq DNA polymerase. Short oligonucleotide sequences, complementary to the target of interest, are labeled with a fluorescent reporter dye at the 5′ end (see Table 5 below) and a non-fluorescent quencher dye at the 3′ end (see Table 6 below). During PCR cycling, primers and probe anneal to the target. As Taq DNA polymerase binds to and extends the primer upstream of the probe, the hybridized probe is hydrolyzed and the fragment containing the reporter dye is released. The fluorescence signal can now be detected and the amount of fluorescence signal generated is proportional to the amount of qPCR products produced.

We offer a broad range of dye phosphoramidites and dye CPG supports for developing FRET oligonucleotides, TaqMan® probes and Molecular Beacons. This set includes classic dyes such as FAM, HEX, TET and JOE, as well as superior oligo-labeling dyes such as Tide Fluor™ and Tide Quencher™ dyes.

Table 6. Quencher dyes for labeling the 5′ end or 3′ end on sequence-specific qPCR probes.

Tide Fluor™ dyes are a series of donor dyes optimized for developing FRET oligonucleotides and peptides for a variety of biological applications. Compared to common donor dyes such as EDANS, FAM, TAMRA, ROX, Cy 3 and Cy5, Tide Fluor™ dyes exhibit stronger fluorescence and higher photostability. They are the best affordable fluorescent dyes for labeling peptides and oligonucleotides without sacrificing performance.

Although DABCYL has been used to develop a variety of FRET applications, its low quenching efficiency for longer wavelength dyes (such as fluoresceins, rhodamines and cyanines) has limited its use in the development of sensitive fluorogenic FRET probes. Additionally, the absorption spectrum of DABCYL is environment-sensitive. AAT Bioquest has developed robust Tide Quencher™ acceptor dyes for the development of longer wavelength FRET probes. Tide Quencher™ dyes are a great choice to eliminate the limitations of classic quenchers. 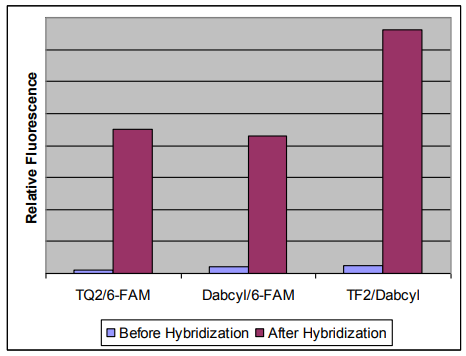