Real-time polymerase chain reaction, also referred to as quantitative PCR (qPCR), is a highly sensitive technique routinely used in molecular biology to detect and quantify specific oligonucleotide sequences or analyze variations in gene expression levels. By combining both the DNA amplification and detection process in a single step, qPCR enables researchers to measure relative or absolute amplicon concentration in real-time, as it is being generated throughout the PCR cycling process. Apart from gene expression studies, qPCR has found utility in a broad range of molecular biology applications, including genotyping, drug target validation, biomarker discovery, pathogen detection, and measuring RNA interference. Furthermore, with minor modifications to the basic protocol and the addition of the enzyme reverse transcriptase, qPCR can be adapted to monitor mRNA levels to detect and diagnose viral infections.

In qPCR, the same amplification procedure is used as in conventional PCR. A segment of target DNA, which serves as a template, is combined in a single tube along with other components essential to the amplification reaction (e.g., thermostable DNA polymerases, forward and reverse primers, deoxynucleotide triphosphates (dNTPs), and reaction buffer). The prepared tube is placed in an instrument, referred to as a thermal cycler. A thermal cycler is a laboratory apparatus that typically has a thermal block with holes where tubes holding the PCR reaction mixture are inserted. The reaction contents are then subjected to a series of time and temperature-dependent steps– denaturation, primer annealing, and extension (see Table 1) – This series of steps is repeated 25 to 30 times, resulting in an exponential amplification of the DNA template.

Table 1. Overview of the basic steps in the qPCR cycling reaction

The major differences between qPCR and conventional PCR are two-fold. First, qPCR provides the opportunity to integrate various fluorescent detection strategies, such as using DNA-intercalating dyes or sequence-specific fluorescent probes, to measure amplicon concentration after each PCR cycle. Fluorescence is monitored throughout the entire PCR process, and the amount of fluorescence generated during amplification is directly proportional to the amount of amplified DNA produced. Second, qPCR requires a thermal cycler equipped with an optical detection module to measure the fluorescence signal generated. By plotting fluorescence intensity versus the cycle number, qPCR instruments can generate curves known as amplification plots, representing the accumulation of amplicons over the duration of the entire PCR run.

Figure 2. qPCR using Helixyte™ Green (Cat No. 17591). DNA polymerase extends the sequence-specific primer during the extension phase by incorporating dNTPs complementary to the DNA template. As newly synthesized double-stranded DNA is produced, Helixyte™ Green; will bind to the DNA complexes and fluoresce (figure made in BioRender).

In dye-based qPCR assays, DNA-intercalating fluorophores, such as Helixyte™ Green bind specifically to the minor groove of dsDNA to measure DNA amplification as it occurs throughout the PCR process. Alone such dyes display weak background fluorescence, but fluorescence intensity is enhanced significantly upon binding to dsDNA. As amplicon concentration increases with each successive cycle of amplification, so does the fluorescence intensity of the dye, to a degree proportional to the amount of dsDNA present in each PCR cycle. Set-up for this type of qPCR reaction is simple and convenient. All the necessary components, including two sequence-specific primers, a DNA template, and the DNA-binding dye, are mixed in a single reaction tube. This allows for the amplification and detection of PCR products to occur simultaneously and eliminates the need for any post-PCR manipulations. 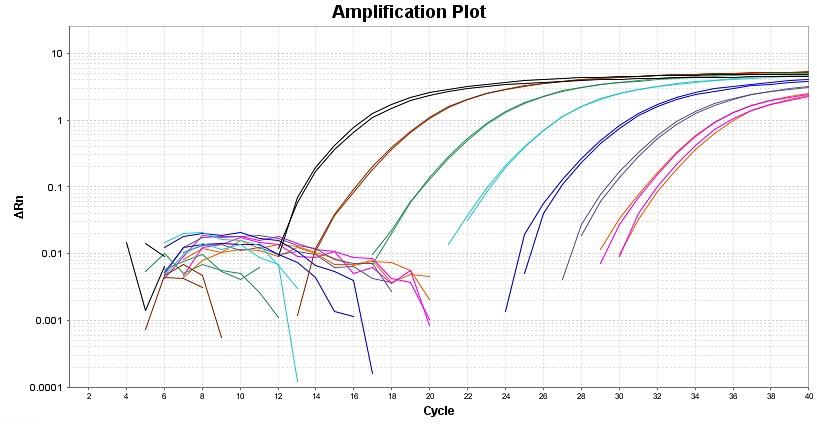 Compared to microarrays, dye-based qPCR is more sensitive at detecting modest changes in expression levels, making it well-suited for investigating small subsets of genes. Although dsDNA-binding dyes provide the most convenient and cost-effective option for qPCR, the principal drawback to intercalation-based detection is that it is not sequence-specific. Any dsDNA produced from off-target and non-template amplification (NTC) will be observed, resulting in less accurate quantification. To check for primer-dimer artifacts and to ensure amplification specificity, perform a melt curve analysis post-amplification.

Figure 4. Illustration of probe-based qPCR. As DNA polymerase extends the primer during elongation, it hydrolyzes sequence-specific probes that have annealed to the single-stranded DNA template, separating the reporter dye from the quencher and resulting in an amplification-dependent increase in fluorescence (figure made in BioRender).

In probe-based qPCR, sequence-specific fluorescent probes are used in combination with primers to detect the amplification product. Of the many probe-based qPCR chemistries available, including hybridization probes and molecular beacons, the most widely used employs the 5’ nuclease assay associated with Taq DNA polymerase.

Probes for 5’ nuclease assays are synthesized with a fluorescent reporter dye (see Table 3 below), such as FAM, HEX, NED, TET, VIC, Cy3, or Tide Fluor™ dyes, covalently attached to the 5’ end and a quencher dye (see Table 4 below), such as DABCYL, TAMRA, BXQ-1, BXQ-2 or Tide Quencher™ dyes, to the 3’ end of a short oligonucleotide, which is complementary to the target DNA sequence. While the probe is intact, the reporter and quencher remain in close proximity to each other, FRET occurs, and consequently, the reporter dye signal is quenched. During PCR cycling, both the primers and probe anneal to the target. As Taq DNA polymerase binds to and extends the primer upstream of the probe, any probe bound to the correct target sequence is hydrolyzed, and the fragment containing the reporter dye is released. The fluorescence signal can now be detected, and the amount of fluorescence signal generated is proportional to the amount of qPCR products produced. See Table 5 below for information on fluorescent reporter/quencher pairs commonly used in qPCR.

Not only does this method benefit from high sensitivity and specificity, but it also allows multiplexing using probes with different combinations of reporter dyes. This allows for an increase in throughput, meaning multiple samples can be assayed per plate, and consequently, there is a reduction in both sample and reagent usage.

Table 4. Quencher dyes for labeling the 5′ end or 3′ end on sequence-specific qPCR probes.

The TAQuest™ qPCR Master Mixes are 2X concentrated, ready-to-use mixes designed to simplify the reaction assembly for qPCR without compromising sensitivity, specificity, or PCR efficiency. In a convenient pre-mixed solution, TAQuest™ qPCR Master Mixes contain all the essential components needed to perform a qPCR experiment, except for the template, primers, and probes (if using). It includes a TAQuest™ Hot Start Taq DNA Polymerase enzyme to facilitate reaction set up at room temperature, PCR-grade dNTPs, MgCl₂, as well as enhancers and stabilizers in an optimized reaction buffer. Some TAQuest™ qPCR Master Mixes also include Helixyte™ Green, a double-stranded DNA binding dye for detecting PCR products during amplification, and a ROX passive reference dye to assist with troubleshooting and increase data precision.

The AAT Bioquest portfolio includes master mixes for two different real-time PCR detection chemistries, Helixyte™ green and probe-based (e.g., TaqMan). Helixyte™ green TAQuest™ qPCR Master Mixes include the dsDNA binding dye Helixyte™ green in the reaction mixture to directly detect target amplification via nonspecific binding to dsDNA. Helixyte™ green master mixes are cost-effective and a flexible option when using target species not pre-defined. Probe-based TAQuest™ qPCR Master Mixes provide better specificity and are compatible with running multiplex assays. These master mixes are ready-to-use cocktails containing most of the reagents for amplifying and detecting DNA in qPCR; only the template, primers, and probe need to be added to the reaction mixture.

Passive reference dyes, such as the ROX reference dye, are essential to the accuracy and reproducibility of qPCR reactions performed on ROX-dependent PCR cyclers (e.g., the Applied Biosystems® instruments). When added to the qPCR master mix, the ROX Reference Dye is designed to normalize the fluorescent signal of qPCR reporter dyes or hybridization probes and account for non-PCR-related fluorescence signal variations, including pipetting errors, bubbles, condensation, and evaporative loss, and instrument variation. Since the ROX Reference Dye does not interfere with the qPCR reaction and has an easily discernable red emission spectrum, it provides an excellent baseline in multiplex qPCR assays. Although ROX has been widely used in qPCR, its convenience is limited by its low stability. Moreover, ROX must be cold-stored to preserve its fluorescence.

AAT Bioquest® 6-ROXtra™ – with spectral properties nearly identical to ROX – has considerable stability and water solubility improvements. Compared to ROX, 6-ROXtra™ offers a convenient method for normalizing fluorescent reporter signals in qPCR without modifying the instrument’s default analysis parameters. In addition, 6-ROXtra™ can act as an internal control to improve the precision of qPCR data by: 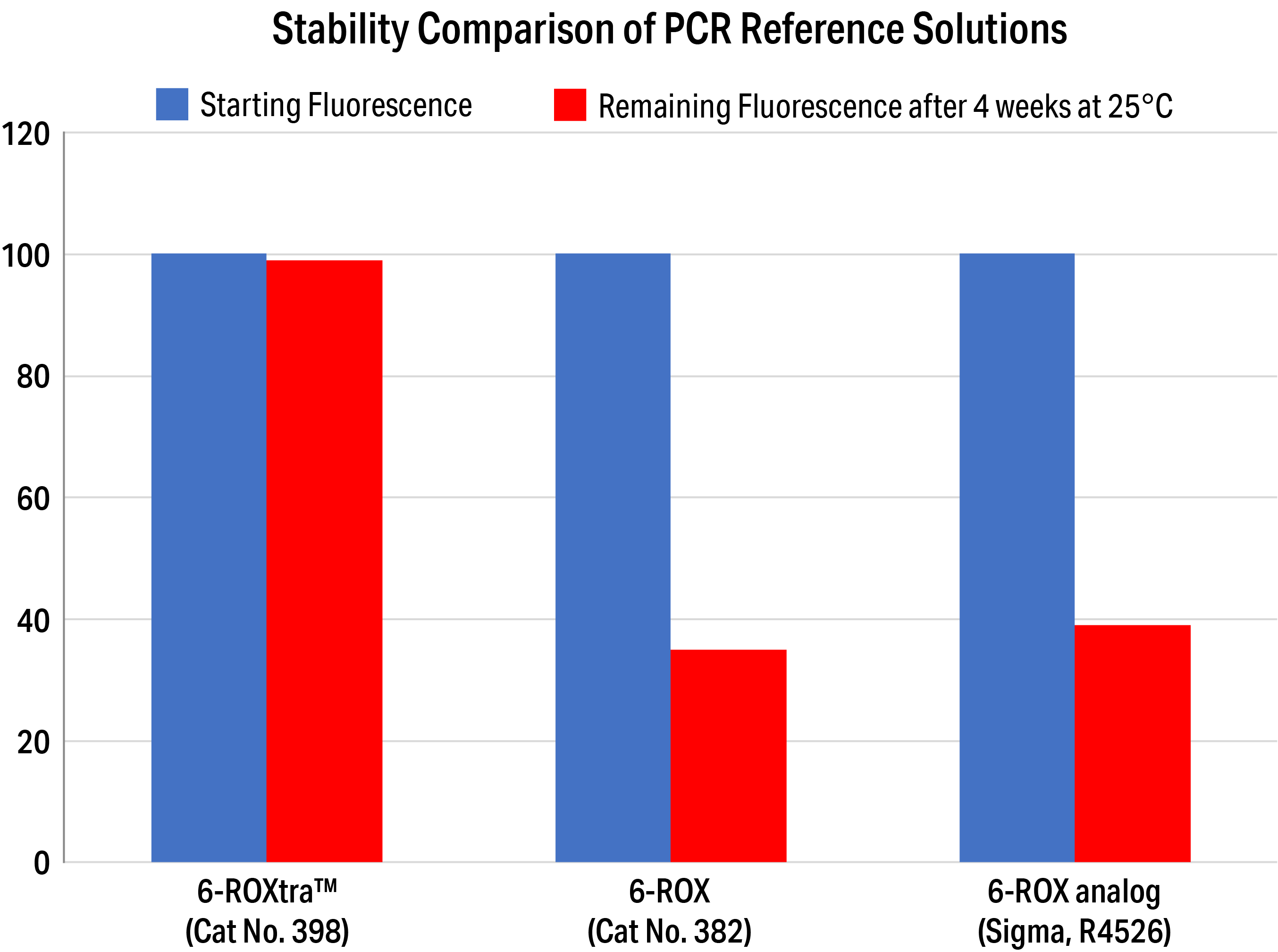