S-adenosylmethionine (SAM) is an important molecule in methionine cycle pathway and one carbon metabolism pathway that are implicated in many metabolic abnomalities found in humans. Methylation index is defined as the ratio of SAM and SAH, which is a better way to evaluate methylation status of humans and other
organisms. The level of  S-adenosylmethionine (SAM) fluctuates depending on age, gender, race, body weight, diet, medicines taken, health and disease conditions. The internal unstable nature of SAM molecule and the dynamics of methylation process from an in vivo environment make measuring its de-methylation product S-adenosylhomocysteine (SAH) critical in the process of evaluating the status and extent of biochemical methylation process in a living body.

Below is a simple diagram (Melnyk S, Clin. Chem. 2000) that illustrates methionine cycle (a part of one carbon metabolism pathway) that details factors involved in the methylation process. Genetic or nutritional disturbances (e.g. deficiency of folate, Vitamin B12, B6, methionine or choline) that prevent efficient product removal of homocysteine (Hcy) or adenosine will lead to S-adenosylhomocysteine (SAH) accumulcation. Excess SAH and Hcy is thought to readily cross the cell membrance into the plasma. Elevated SAH or Hcy has been associated with increased risk of cardiovascular diseases, colon cancers, birth defects, recurrent pregnancy loss, central nervous system demyelinization and neuropsychiatric disorders. Increased SAH leads to methyltransferase inhibition, which reduces methylation of essential molecules such as DNA, RNA, protein, neurotransmitters, etc. This means methylation index is much reduced in many pathological processes. 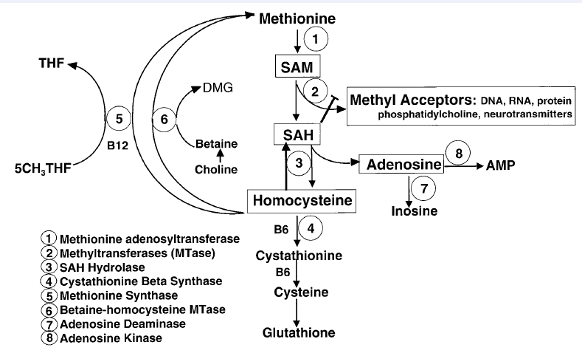 They are proud to be able to provide an effective method to easily and quickly measure methylation index. The research tools we provide will improve our further unerstandings of methionine cycle and one carbon metabolism pathways.

Monitoring  S-adenosylmethionine (SAM) and S-adenosylhomocysteine (SAH) changes in the body fluids, tissues, and organelles are important as  it has been anticipated that SAM and methylation index (SAM/SAH) have clinical implications in a broad range of disease conditions. It is also critically necessary to understand the impacts and consequences when SAM is used daily as a nutritional supplement and over-the-counter medicine in order to avoid unwanted side effects (insomnia, high blood pressure, gas, nausea, vomitting, diarrhea) and ensure that the proper treatment dosages are applied or taken.

As discussed in other Research section, most likely methylation index is expected to be at least the same as measuring SAM alone. Carefully designed and thorough studies in clinical settings remain to be performed to expand our current knowledge on actual methylation index levels in healthy and diseased individuals, and how it is related to various disease conditions and stages. More accurate measurements of SAM and methylation index, as obtained by using our products, can be valuable in helping to diagnose existing or hidden pathologies. Many interesting discoveries are under way given the new research tools we are offering.

It has been shown that reduced methylation index is associated with vitamin deficiency in pregnant women and newborns, Down’s Syndrome and Congenital Heart Disease (CHD).

Increasing evidence suggested that epigenetic mechanisms such as DNA methylation and histone tail modifications are dynamically regulated in neurons and play a fundamental role in learning and memory processes. Studies in animal models of neurodegenerative diseases (Alzheimer’s disease, Parkinson’s disease, Huntington’s disease, Amyotrophic Lateral Sclerosis) have highlighted the potential role of epigenetic drugs, including inhibitors of histone deacetylases and methyl donor compounds, in ameliorating the cognitive symptoms and preventing or delaying the motor symptoms of the disease, thereby opening the way for a potential application in human pathology (Coppede, F  Frontiers in Genetics  July 14, 2014).