One of the important S-adenosylmethionine (SAM) analogs that has been proven to be very useful assisting in SAM related studies is described in detailed in US patent US8344115. Its chemical name is 5’-N-Methyl, 5’-N-butyryl-5’-deoxyadenosine, or 5′-[(3-carboxypropyl)methylamino]-5′-deoxy-adenosine, abbreviated as Aza-deamino-SAM or AdaM. It has a very good  thermostability and yet a high hygroscopicity. This analog can also be used as a standard in in intro assays of SAM.

It is difficult to generate antibodies against this biologically extremely active metabolite. Our researchers have developed and produced monoclonal and polyclonal antibodies against S-adenosylmethionine, or SAM. The cross-reactions to its closely related analogs, such as S-Adenosylhomocysteine, or SAH, as well as methionine and adenosine, have been tested to be very trivial.

Our products make it possible to measure the level of S-adenosylmethionine (SAM) and S-adenosylhomocysteine (SAH) in biosamples quickly, accurately and easily by common technicians in a lab with inexpensive instruments.

How to measure it?

Since SAM is an intrinsically unstable molecule, the determination of its concentration in various biological fluids and tissues has been challenging. A simple, convenient method that does not require costly instrumentation, such as HPLC series of technology, LC, MS, and combinations of MS, is clearly desirable for this determination. With our patented technology, we are able to provide all that are needed to quantitatively measure SAM and help solve technical issues in the process.

Using our products to measure SAM levels in plasma and serum, many clinical studies are made possible to confirm the above statements. Many studies remain there for scientists of different fields worldwide to get into. We believe more and more important findings related to methylation index will come out in the near future.

The normal range of SAM concentration in blood, serum, and plasma has not been determined accurately. Due to population, sample handling, pre-treatment, and detection methods, published results have been inconsistent. It has been recently reported that SAM level in human plasma is about 60nM-140 nM as measured by LC-MS/MS method (Klepacki J, Clin Chim Acta, 2013), whereas > 1.5 uM as measured by HPLC (Carolynk K, J. Chromatography, 1997). Even laboratories utilizing similar techniques have reported wide ranges of concentration for healthy patients. The data is, in general, most useful for comparison within the context of the particular studies. In view of the importance of SAM, it is desirable to have an easy and reliable method to measure its concentration in a biological sample. In immunoassays with high quality antibody against SAM, it is certain that the molecule which specifically and sensitively binds to the antibody is SAM. That is to say, specificity makes the detection method more reliable at the least.

Below shows the summary of the levels of  S-adenosylmethionine (SAM) and S-adenosylhomocysteine (SAH) reported by different labs (Birsan C, Analytical Letters, 2008). 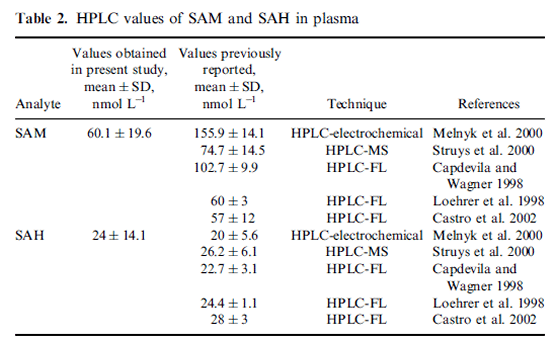 Considerable research has been conducted in the past regarding the functions of SAM. For example SAM-e, incubated in vitro with human erythrocytes, penetrates the cell membrane and increases ATP within the cell thus restoring the cell shape. SAM-e is clinically useful in many apparently unrelated areas because of its important function in basic metabolic processes. One of its most striking clinical uses is in the treatment of alcoholic liver cirrhosis that, until now, remained medically untreatable. SAM-e has been administered to patients with peripheral occlusive arterial disease and was shown to reduce blood viscosity, chiefly via its effect on erythrocyte deformability.

Sam-e attenuates the damage caused by tumor necrosis factor alpha (TNFα) and can also decrease the amount of TNFα secreted by cells. SAM-e has been studied for its ability to reduce the toxicity associated with administration of cyclosporine A, a powerful immunosuppressor. It has also been studied in patients suffering from migraines and was found to be of benefit.

In alcoholic liver, SAM is reduced whereas SAH and Hcy levels are increased. Two genes (MAT1A and MAT2A) encode for the essential enzyme methionine adenosyltransferase (MAT), which catalyzes the biosynthesis of S-adenosylmethionine (SAMe), the principal methyl donor and, in the liver, a precursor of glutathione. MAT1A is expressed mostly in the liver, whereas MAT2A is widely distributed. MAT2A is induced in the liver during periods of rapid growth and dedifferentiation. In human hepatocellular carcinoma (HCC) MAT1A is replaced by MAT2A. This is important pathogenetically because MAT2A expression is associated with lower SAMe levels and faster growth, whereas exogenous SAMe treatment inhibits growth (Lu, SC et al. Alcoho  35(3):227-34, 2005).