Introduction – what is a liposome?

Liposomes are spherical vesicles made up of one or more phospholipid bilayers known as lamellae which surround an aqueous core. They can be created artificially from cholesterol and natural non-toxic phospholipids via a process of hydrating lipid films or lipid cakes then agitating causing lipid sheets to detach and self-close forming large multilamellar vesicles (MLV). These particles are then reduced to the required size by sonication or extrusion. A phospholipid membrane forms a protective barrier around the contents and gives them both hydrophobic and hydrophilic properties, making them biocompatible. This enables them to enclose, transport and deliver aqueous or lipid drugs highly effectively to specified targets. Their properties vary according to composition, surface charge, size and the way they are prepared. 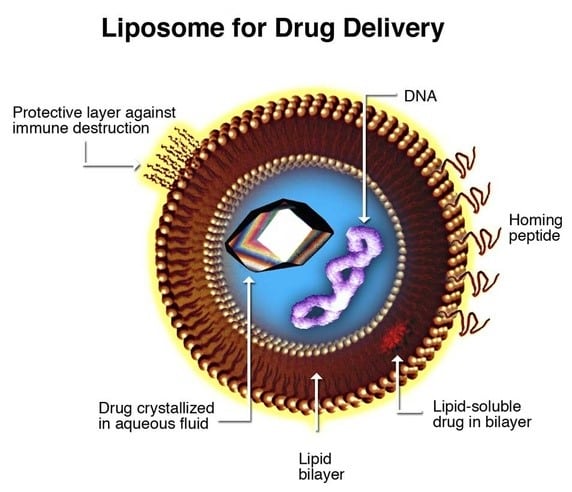 Preparation of lipid for hydration

For liposomes with mixed lipid composition, first dissolve in an organic solvent. Commonly, chloroform or chloroform:methanol is used with the aim of obtaining a clear lipid solution, an alternative is to dissolve the lipids in tertiary butanol or cyclohexane. This will result in a homogenous mixture of lipids. Once the lipids are mixed thoroughly, remove the solvent to leave a lipid film. Dry the lipid film thoroughly to remove residual solvent by leaving overnight in a vial, flask or vacuum pump.

Transfer the lipid solution to containers and freeze, either on a block of ice or using a dry-ice acetone or alcohol bath. Once completely frozen, the lipid cake is placed on a vacuum pump and lypholized for 1-3 days until dry. Once dry, remove the lipid film/cake, seal and store frozen until needed for hydration.

Hydration of lipid film/cake
The process of hydrating the lipid film/cake is relatively simple. The same method can be used for all lipid vesicles. Hydration will cause stacks of liquid crystalline bilayers to become fluid and swell. The hydrated sheets are then agitated causing them to detach and self-close. Add an aqueous medium to the container and agitate. The medium chosen could be: distilled water, buffer solutions, saline, and nonelectrolytes such as sugar solutions, the choice will depend on the application of the lipid vesicles.

Before adding, ensure the temperature of the medium is above the gel-liquid crystal transition temperature (Tc or Tm) of the lipid with the highest Tc. Maintain the suspension above the Tc throughout hydration. A hydration time of one hour with vigorous shaking/mixing/stirring is recommended. If the suspension is left to stand overnight homogeneity is improved and the sizing process becomes easier. For in vivo applications, physiological osmolality (290 mOsm/kg) is recommended; examples include 0.9% saline, 5% dextrose or 10% sucrose.

Hydration will yield a product of a large, multilamellar vesicle (MLV) (around 2.5 μm), similar in structure to an onion. Each phospholipid bilayer is separated by a layer of water. The hydrated MLV suspension should be stable. There are a variety of techniques, including sonication or extrusion, to downsize the MLV particles to small or large unilamellar vesicles (SUV/LUV).

Mechanical dispersion methods include: sonication, French pressure cell: extrusion, freeze-thawed liposomes, lipid film hydration, micro-emulsification, membrane extrusion or reconstituted vesicles. Sonication is the most extensively used method to prepare SUVs. MLVs can be sonicated using a bath-type sonicator or a probe sonicator under a passive atmosphere. This method does have its disadvantages though: very low internal volume/encapsulation efficacy; possible degradation of the phospholipids as well as the compounds destined to be encapsulated; elimination of large molecules; pollution of metal from the probe tip and the yield could include MLV (Multilamellar Vesicles) as well as SUV.

Sonication can be carried out using either probe sonication or bath sonication. Probe sonication utilises a high energy input from a probe which is inserted directly into the liposome dispersion. This takes up to one hour and temperature needs to be controlled.  Disadvantages: titanium pollution from the tip of the probe and heating around the tip will cause de-esterification of more than 5% of the lipids.
Bath sonication involves the liposome dispersion being placed into a bath sonicator. This method is easier to control and the liposomes and other compounds being sonicated can be protected within a sterile vessel.

Extrusion
Lipid extrusion involves forcing the lipid suspension through a polycarbonate filter with a pre-determined pore size to obtain a yield of particles with the diameter close to the pore size of the filter. To improve the homogeneity of the final suspension and to protect LMV membranes from damage, LMV suspensions need to be disrupted prior to extrusion through the final pore size. This is achieved by either putting the suspension through several freeze-thaw cycles or pre-filtering through a larger pore size (typically 0.2µm-1.0µm). Temperatures need to be maintained above the temperature of the Tc of the lipid throughout extrusion. Mean particle size depends upon the lipid composition but is reproducible from batch to batch.

Conclusion
Liposomes can encapsulate both water-soluble and lipid-soluble compounds/drugs within their aqueous spaces or membranes, respectively. The liposome provides protection and a safe mode of transport to specific, designated cells without causing harm to healthy cells. The phospholipid membrane is resistant to digestive enzymes, alkaline solutions and the environment of the gut as well as free radicals. Their role in drug delivery is extremely valuable. A drug’s therapeutic index is increased while its side effects are minimised. Liposome preparation is relatively simple with tried and tested technology available to produce liposomes according to specific requirements.