Monoclonal antibody clone H09 is specific for the R132H mutation of IDH1. It does not bind to the unaltered protein. Therefore, if the H09 tissue staining is positive, pathologists are able to confirm a diagnosis of astrocytomas or oligodendrogliomas.

Furthermore, the antibody aids in the detection of individual cancer cells in the tissue zone surrounding  the tumour and in the infiltration zone of diffuse astrocytomas. Moreover, several independent studies have shown that IDH1 R132H mutations in lowgrade and anaplastic gliomas and secondary glioblastomas correlate with favorable patient survival times.

Besides IDH1 R132H, other IDH point mutations in the IDH1 and IDH2 genes have been found in gliomas, but all with far less frequency: About 95% of all IDH1/2 mutations are in IDH1, and among those over 90% are type R132H. This makes an R132H-specific antibody an excellent screening test. The sensitivity and specificity of the anti-IDH1 R132H antibody clone H09 to detect positive tumour cells have been widely demonstrated in several studies and allow good results in the routine immunohistochemistry of formalin-fixed, paraffin-embedded tissues.

The anti-IDH1 R132H-specific antibody clone H09, which is very robust on FFPE-tissues has rendered upfront DNA-sequencing for different IDH point mutations unnecessary. The National Comprehensive Cancer Network (NCCN) and the EURO-CNS research committee recommend for optimal testing of the IDH1 mutation status in glioma to first perform immunohistochemical testing with the anti-IDH1 R132H antibody, then to follow up with DNA-sequencing only when the results from immunohistochemistry are negative.
The practical aspects of routine IDH1 R132H immunohistochemistry are clear:

The strong diagnostic and prognostic implications of IDH1 mutations implicate that routine IDH1 R132H immunostaining needs to be considered as an initial screening method in all gliomas, including suboptimal biopsies suspected of harboring glioma cells. Only in case of a negative staining result (low-grade or anaplastic astrocytoma, oligodendroglioma, oligoastrocytoma or a glioblastoma with oligodendroglial component) direct sequencing for less common IDH1 and IDH2 mutations should be performed. 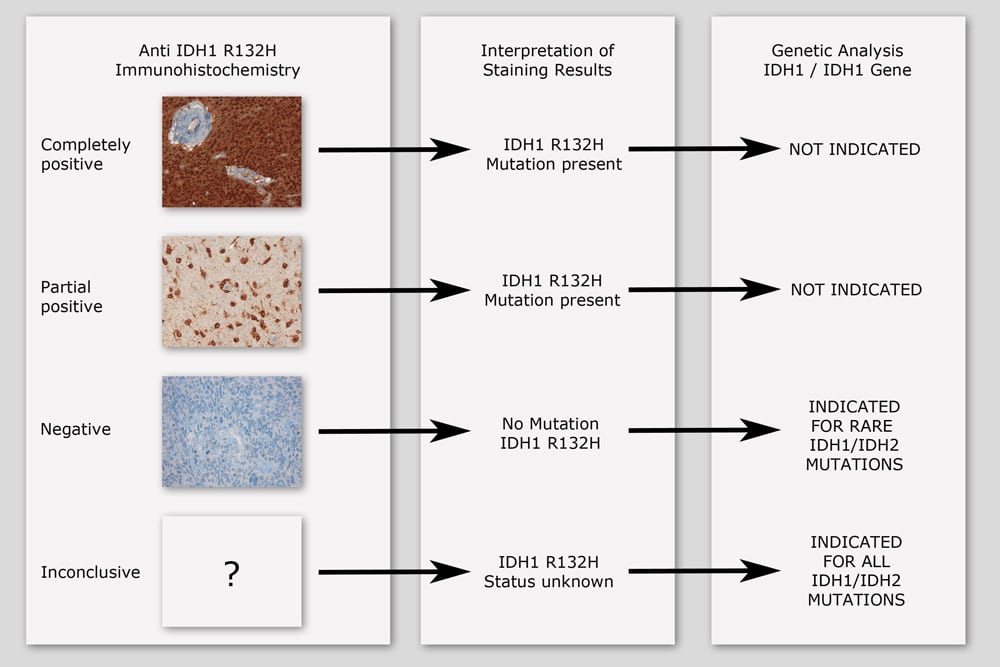 IDH1 R132H immunohistochemistry has changed routine diagnostic neuropathology, because it allows narrowing down the possible diagnosis to the group of diffusely infiltrating gliomas of WHO Grades II and III and secondary glioblastoma and to a certain extent to primary glioblastoma. The determination of the IDH1 mutation status strongly supports the differential diagnosis between an anaplastic glioma and a glioblastoma. Furthermore, the detection of even single IDH1 R132H-positive cells clearly supports the diagnosis of a diffusely infiltrating glioma. Again, the detection of positive cells by IDH1 R132H immunohistochemistry allows a clear and safe separation between low-grade glioma and reactive gliosis.

The presence of IDH mutations in diffuse gliomas has been shown to be associated with favorable patient survival time in several studies. This effect seems to be independent from other strong prognostic factors and correlated with 1p/19q deletion and MGMT promoter methylation. In studies pooling low-grade astrocytomas and oligodendrogliomas the IDH mutation status was prognostic for overall and progression free survival. In primary glioblastoma IDH1 mutational status has been reported to be the only factor that showed significant association with patient survival times. The consistent finding of a more favorable outcome of diffuse glioma patients with IDH mutations implies that IDH testing might be useful for prognostic considerations in the clinical setting.

IDH mutations were correlated with a higher rate of responses to up-front temozolomide in low-grade glioma patients. Also, evidence for differential responsiveness to genotoxic therapy of IDH1 mutant versus IDH1 wild-type lowgrade gliomas has been provided: The presence of IDH1 mutations was associated with favorable progression-free and overall survival in WHO Grade II gliomas who received radio- or chemotherapy. Current studies aim to validate and clarify the predictive value of IDH mutations in the different glioma types. Moreover, it remains to be seen whether targeted therapies may be effective in IDH-mutant gliomas. In 2014, Cancer researchers from Heidelberg reported the first positive results toward a therapeutic application of a IDH1 R123H mutation-specific vaccine.