Mutations in IDH1 and IDH2 are considered as strong prognostic marker, independently from the other well-known prognostic factors, and correlate with enhanced patient survival. By far the most common mutation is IDH1 R132, it occurs in roughly 70% of astrocytomas and oligodendroglial tumors 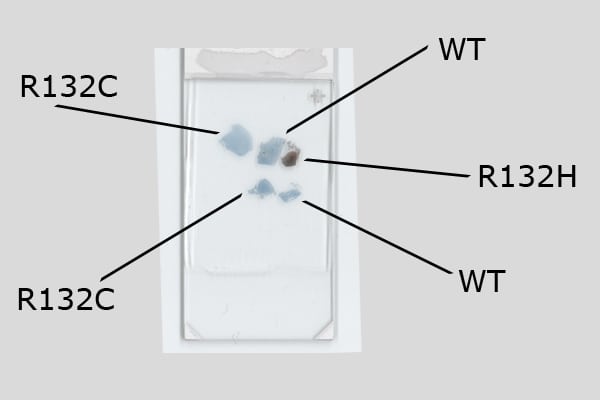 IDH mutations in other tumors

IDH1 and IDH2 mutations are almost glioma specific. In most of other human tumors IDH1/2 mutations are extremely rare. Despite, they have been reported at lower frequency in mesenchymal tumors, particularly haematopoietic malignancies and chondroid neoplasms. IDH mutations were identified in approximately 8% of patients with acute myeloid leukemia (AML), in myeloproliferative neoplasms and myelodysplastic syndromes. Among AML patients mutations typically affect the IDH2 gene. Rare instances of AML patients with mutations in both IDH1 and IDH2 have been described, unlike gliomas. Besides, IDH1 mutations have also been reported in endochondromas, in central or differentiated chondrosarcomas, but not in peripheral chondrosarcomas or osteochondromas.

In addition to IDH1 and IDH2, 3 more genes have been identified (IDH3A, IDH3B. IDH3G), but have not been implicated to date in gliomas. Mutations typically affect the enzyme’s active site at codon R132 in the IDH1 gene and its homologous R172 in the IDH2 gene. Over 90% of the reported mutations affect the IDH1 gene: Interestingly, the R132H substitution accounts >90%. R132C, R132G, R132L mutations show much lower frequency (<3,2%).

The IDH1 and IDH2 isoforms are structurally related with 70% of sequence identity and function as NADP+ dependent homodimers. Isocitrate dehydrogenases (IDH) are key enzymes catalyzing the oxidative decarboxylation of isocitrate to α-ketoglutarate (α-KG) in the Krebs cycle, with production of NADH/NADPH. The enzymatic activity of IDH mutant proteins is significantly reduced and results in an 100-fold increase in the amount of D-2-HG. D-2-HG is structurally similar to α-KG. It functions as a competitive inhibitor of multiple α-KG-dependent enzymes, which are mainly dioxygenases with important roles for cancer. These use α-KG as co-substrate to catalyze different reactions affecting cancer, e.g. DNA-repair and response to hypoxia.

Practical guidelines for a reliable detection of IDH mutations in glioma (National Comprehensive Cancer Network (NCCN), EURO-CNS research committee) recommend to first perform immunohistochemical testing with the anti-IDH1 R132H antibody, then to follow up with DNA/PCR-based detection techniques for other less frequent IDH mutations only when the results from immunohistochemistry are negative.