Are you one of the many labs working to develop VHH antibodies (nanobodies)? Our COO Dr Dave Fancy introduces JIR’s suite of Anti-Camelid Antibodies that can be used to enhance your nanobody research and development process.

From monitoring the post immunisation immune response, expression screening of clones by Western blotting and ELISA, through to imaging and counting by immunofluorescence or flow cytometry,  JIR’s Anti-Alpaca antbodies are a comprehensive tool kit to advance your development goals.

At Jackson ImmunoResearch, our mission is to develop the widest range of high quality secondary antibodies for the life science community. To support the growing adoption of camelid-derived heavy chain variable domain (VHH) technologies in a multitude of applications, including next-generation immunotherapeutics, medical imaging, analytical and diagnostic assay development and research discovery, JIR offers three new secondary antibody specificities for detection and quantification of camelid antibodies.

Antibodies derived from camelid species such as alpaca and llama have unique qualities that have been exploited for creation of engineered antibodies. Since the first isolation of heavy chain antibodies from camel in 1989, researchers have focused on the 12-15 kDa antigen-binding VHH domain, commonly called the nanobody†, as a model for recombinant antibody production. Several distinguishing characteristics of VHH antibodies are their ability to cross the blood-brain barrier and access other remote locations, and to bind antigen tightly through a long CDR3 loop.

Other advantages of VHH antibodies are that they are easy to clone and produce at high levels in recombinant systems, are stable to heat and pH extremes, and are generally quite soluble. Given their unique properties, VHH antibodies are being used in a variety of applications including diagnostic kits to detect small molecules, as biosensors and in numerous medical applications such as cancer treatment. VHH antibodies are powerful tools for discovery.

Figure 1: Alpaca and llama immunoglobulins (*In camels IgG2 is described as having the longer hinge (Maass et al., 2007)).

Jackson ImmunoResearch Anti-Alpaca (H+L) and Anti-Alpaca (2+3) are suitable for detection of both alpaca and llama IgG. Figures 2 and 3 detail the detection of IgG subclasses from both species by Western blot.

IgG subclasses purified from serum using a method from Maass et al. (2007) were separated by SDS/PAGE under non-reducing conditions. Gels were blotted onto nitrocellulose membranes and probed with HRP-conjugated antibody at a 1:20,000 dilution (see below). Proteins were detected using chemiluminescent substrate and imaged for 5 min 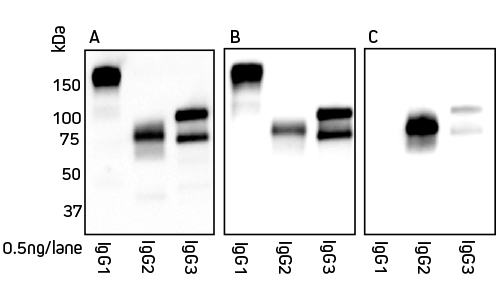 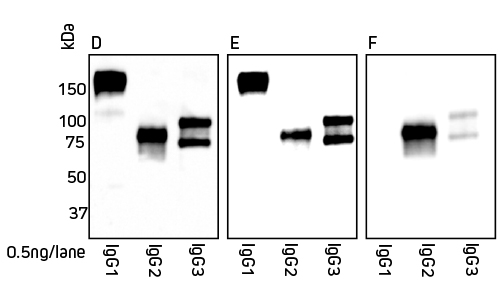 The development of engineered VHH antibodies can be initiated by immunizing an alpaca or llama with a protein of interest. Monitoring of the immune response enables a researcher to harvest PBMCs at an optimal time, after in vivo maturation has resulted in a diverse repertoire of specificities.

Figure 4a: Serum conversion kinetics. Products 128-035-160 and 128-035-229 were used to measure antigen-specific antibody titers in alpaca serum over the course of a typical immunization/boost schedule.

Figure 4b: Percentage of IgG2+3 compared to total IgG by ELISA.

Total IgG titer might suggest a harvest point at 150 days, but the IgG2 and 3 response is not optimal until after 300 days post immunization.

We are delighted to offer 3 new specificities to our range!

This antibody enables detection of the heavy chain subclasses 2 and 3 from both alpaca and llama serum and PBMCs, without recognizing IgG1.

For a detailed history of Camelid antibodies

† Nanobody and Nanobodies are registered trademarks of Ablynx N.V.