Mice express 4 of the 5 available IgG subclasses making up their IgG isotype. They typically encode for IgG1, IgG2b and IgG3, and depending on their strain will also express either IgG2a or IgG2c (Collins 2016). IgG2a and IgG2c subclasses are seen as functionally comparable, being the most active of the subclasses to bind complement (Collins 2016).

Inbred mouse strains, such as C57Bl/6, C57Bl/10, SJL and NOD mice, possess an IgH-1b allele which results in expression of IgG2c instead of the IgG2a subclass expressed by BALB/c and Swiss Webster mice. The IgH-1a haplotype of these mice strains include the IGHG2C gene alongside the other isotypes, but not the IGHG2A present on the IgH-1b haplotype of the BALB/c mice (Martin et al 1998).

A number of monoclonal antibodies originate from these inbred stains, and some IgG2c clones have been incorrectly isotyped as IgG2a by reagents that cannot distinguish between these two subclasses. Subclass specific antibodies from Jackson ImmunoResearch provide exquisite discrimination among the subclasses.

They have been adsorbed against human, bovine and rabbit serum proteins to minimize interference from cross-reactivity with tissue immunoglobulins, adherent bovine IgG on cultured cells and rabbit primary antibodies. 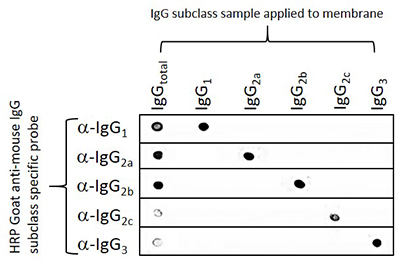