Parkinson’s Disease (PD) is a neurodegenerative disorder characterized by the aggregation of alpha synuclein into Lewy bodies in the brain.  Alpha synuclein is a 14-kDa protein encoded by the SNCA gene. There is conflicting evidence regarding the native state of alpha synuclein: it may be an unfolded monomer,1 folded tetramer, or a dynamic equilibrium between these and other oligomers.2 In Parkinson’s Disease, these smaller forms aggregate into protofibrils, fibrils, and ultimate Lewy bodies, which are thought to cause neuronal dysfunction and death. There is also the possibility that the oligomers and protofibrils are the neurotoxic species3-6 while Lewy bodies are neuroprotective.7

What is the A53T mutation?

What is the role of the A53T mutation in Parkinson’s Disease?

The A53T mutation has been linked to autosomal dominant, early-onset PD, first documented in families of Italian and Greek descent.8 It has also been documented in a Korean family.9 A53T mutation results in an earlier age of onset and a shorter disease duration.8  Even though most cases of PD are sporadic, not inherited, and do not involve the A53T mutation, understanding the role of A53T could help researchers better understand mechanisms of alpha synuclein aggregation and develop better models and therapies. 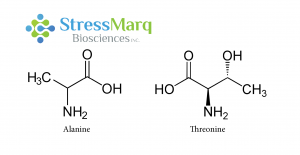 The A53T mutation only involves a single changed amino acid, and alanine and threonine are structurally similar, so why is there such a significant effect? A53T and other disease-causing mutations occur in the N-terminal region of the alpha synuclein protein.  Theoretical models indicate that the A53T mutation causes long-range interactions between the NAC region and the N- or C-terminal regions of alpha synuclein to disappear, leading to an increase in beta-sheet formation.13 NMR measurements indicate that the A53T mutation could extend and stabilize beta-sheet structures involved in oligomerization and fibrillization.14 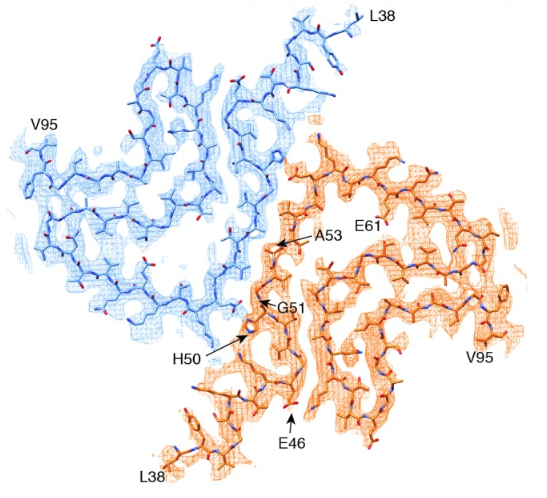 The cryo-EM-determined structure of alpha synuclein shows most disease-causing mutations to be located at the interface between two protofilaments.15 Source: doi.org/10.7554/eLife.36402.001 © 2018, Guerrero-Ferreira et al.

Cryo-EM analysis revealed that alpha synuclein fibrils consist of two protofilaments twisted together into left-handed helices.16 The A53T mutation, along with four of the five other early-onset PD mutations, is located at the interphase between the two protofilaments.16 Introducing a hydrophilic residue such as threonine disrupts this “steric-zipper interphase” and changes the structure of the fibrils.16

Effects of the A53T Mutation

Synapses are components of neurons responsible for the transfer of information between neurons via synaptic vesicles.23 Both A53T and WT alpha synuclein suppress presynaptic transmission by depleting the synaptic vesicle recycling pool.24 A53T alpha synuclein expression also produces postsynaptic deficits.25 These postsynaptic deficits are caused by the hyperphosphorylation of tau and its mislocalization to dendritic spines.24

When A53T alpha synuclein is selectively expressed in mouse astrocytes, it leads to rapid paralysis.29 This is thought to be due decreased glutamate transporter expression disruption leading to downstream activation of microglia.29

In differentiated PC12 cells, increasing A53T alpha synuclein expression led to up to 40% cell death due to increased intracellular ROS level and decreased proteasome activity.32 In this case, ER stress and mitochondrial function involved the release of mitochondrial cytochrome C and elevated caspase-3, -9, and -12 activities, and led to cell death.32