Like colorimetric and chemiluminescent Western blotting, fluorescent Western blotting uses the antigen-antibody complex to detect specific proteins immobilized on a blotting membrane after separation by electrophoresis. Visualization of the protein is achieved by exciting the fluorescent dye using an imaging system equipped with an appropriate light source. The fluorescent dye absorbs light at its excitation wavelength, and then releases photons at its emission wavelength to return the molecule to its ground electronic state. The light emitted by the fluorescent molecule (fluorophore) is then detected by a digital imager equipped with the correct filters.

Fluorescent blotting makes multiplex Western blot analysis easily achievable, as multiple proteins can be simultaneously detected and differentiated on the same blot. Dye conjugated secondary antibodies directed against primaries raised in different species can be used to label each specific antigen (protein) with a dye with its own individual emission wavelength – spectral characteristics. The spectrally distinct dyes are excited by the digital imager and emit light at their signature wavelengths, allowing two or three different proteins to be detected on the same blot (Figure 2). This offers advantages over chemiluminescent and colorimetric detection, which require stripping and reprobing the blot when looking at multiple targets. Fluorescent detection allows the blots to be used quantitatively because proteins on the blot are not perturbed by harsh stripping chemicals. Another benefit is the visualization of proteins that are poorly resolved by electrophoresis, as proteins that are not well separated by size can be distinguished by color. Jackson ImmunoResearch offers fluorescent dye-conjugated secondary antibodies that have minimal cross-reactivity with selected species, enabling detection of individual primary antibodies (and therefore target proteins) without signal overlap. 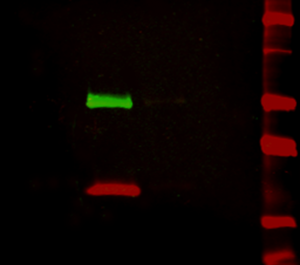 The amount of signal produced is proportional to the amount of protein present. When combined with a wide dynamic range, optimized fluorescent Western blots can be used quantitatively, since both low and high abundance proteins can be detected on the same blot without saturating detection.

Far-red and infrared fluorescent dye conjugates such as Alexa Fluor® 680 and 790 (Figure 2) offer greater sensitivity due to low fluorescence quenching, high extinction coefficients and low background autofluorescence. They can be used for high sensitivity, quantitative and in-gel Western blotting as well as microWestern, in-cell and on-cell Western arrays and other techniques that require the brightest dyes. Due to good stability blots can potentially be archived and re-imaged.

A very simple and quick immunotechnique that can be used for optimizing detection limits and the screening of numerous samples is the dot blot. When migration of an analyte has already been characterized, dot-blotting is a fast and simple way to screen multiple samples for presence of the protein of interest. The use of a grid system allows detection sensitivity to be ascertained without the variability of transfer in multiple Western blots. Using fluorescent dyes it is possible to confirm presence of one or more analytes in sample on the same blot. 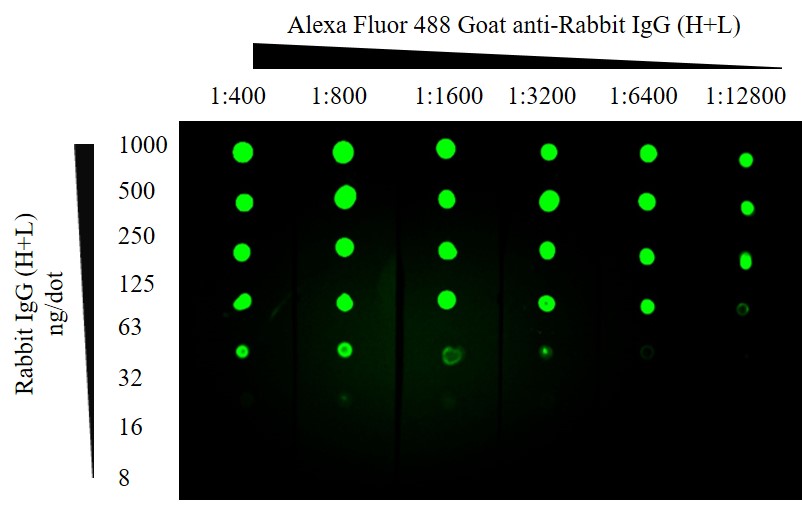 Table 1: Depending on the set-up of your digital imager fluorescent dyes ranging from ultraviolet to infrared may be compatible for use in fluorescent Western blotting. For multiplex detection it is important to select dyes that are spectrally distinct, with no overlapping spectra.

Like chemiluminescent Western blotting, fluorescent blotting requires optimization to improve detection of signal over background noise. Background can come from materials used for blotting, so it is important to select materials that are do not have fluorescent properties. Polyacrylamide electrophoresis gels and blotting membranes (both nitrocellulose and PVDF) may have fluorescent properties which can cause significant background. Observe an unstained gel or membrane using various filter options available on the detection instrument, and if possible choose a fluorescent dye that emits light in a region  where the membrane doesn’t autofluoresce.

Low signal may be due to low antigen (due to low protein expression, degradation or overzealous washing of the blotting membrane), and subsequent fluorescent labeling will be low, even with the amplification benefits of a secondary antibody. Signal can also be reduced due to fluorescence quenching, whereby the signal is diminished by Förster resonance energy transfer (FRET), if the fluorescent labeling is too high. Digital imagers allow efficient optimization of detection conditions compared with chemiluminescent blotting, which requires repeated exposures to optimize.