Although JC-1 is widely used in many labs, its poor water solubility makes it hard to use for some applications. Even at 1 µM concentration, JC-1 tends to precipitate in aqueous buffer.

JC-10 has been developed to be an alternative to JC-1 where high dye concentration is desired.

Compared to JC-1, AAT Bioquest’s JC-10 has much better water solubility.  JC-10 is capable of selectively entering into mitochondria, and reversibly changes its color from green to orange as membrane potentials increase. This property is due to the reversible formation of JC-10 aggregates upon membrane polarization that causes shifts in emitted light from 520 nm (i.e., emission of JC-10 monomeric form) to 570 nm (i.e., emission of J-aggregate). When excited at 490 nm, the color of JC-10 changes reversibly from green to orange as the mitochondrial membrane becomes more polarized. Both colors can be detected using the filters commonly mounted in all flow cytometers. The green emission can be analyzed in fluorescence channel 1 (FL1) and orange emission in fluorescence channel 2 (FL2). Besides its use in flow cytometry, JC-10 can also be used in fluorescence imaging. We have developed two optimized protocols to use JC-10 respectively in fluorescence microplate platform and flow cytometry. Interestingly the performance of JC-10 is quite cell line-dependent. In some cell lines JC-10 has even superior performance to JC-1. 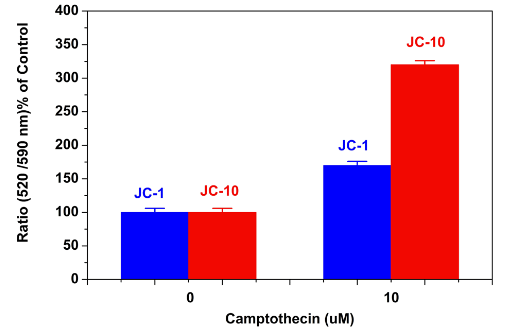 Camptothecin induced mitochondrial membrane potential changes were measured with JC-10 and JC-1 in Jurkat cells. After Jurkat cells were treated with camptothecin (10 µM) for 4 hours, JC-1 and JC-10 dye loading solutions were added to the wells and incubated for 30 minutes. The fluorescent intensities for both J-aggregates and monomeric forms of JC-1 and JC-10 were measured at Ex/Em = 490/525 nm and 540/590 nm with NOVOstar microplate reader (BMG Labtech).