Necrosis is an acute and severe response leading to the premature death of cells consequently damaging nearby cells. Major hallmarks of necrosis include loss of membrane integrity, swelling of cytoplasm, mitochondrial disruption and calcification, fragmentation of organelles, and cell lysis leading to the release of intracellular components of the cell into the microenvironment, which is capable of eliciting an inflammatory response, damaging peripheral cells.

A large number of studies have investigated the molecular mechanisms and pathways associated with both apoptosis and autophagy, detailing these phenomenon as highly characterised, molecular events. Both pathways have been identified as highly conserved, regulated processes. While apoptosis and autophagy have been traditionally regarded as forms of “programmed cell death”, necrosis has historically been considered “un-programmed” due to an apparent, deregulated activity.

However, recent advancements in the field have greatly increased our understanding on necrosis and have since been characterised into multiple, controlled pathways, including necroptosis, pyroptosis ferroptosis and oxytosis, mitochondrial permeability transition (MPT)-dependent necrosis, NETosis/ETosis and parthanatos. Of these various pathways, necroptosis, pyroptosis & ferroptosis have been investigated predominantly. For the scope of this review, we will focus on necroptosis.

Necroptosis is a programmed form of necrosis, and is an alternative mode of regulated cell death, mimicking features of both apoptosis and necrosis. Generally, cell demise and its survival are the fundamental features of metazoans to maintain the tissue homeostasis. On a morphological basis, cell death is achieved by apoptosis, necrosis, and autophagy. Necroptosis is specific to vertebrates and may have originated as an additional defence to pathogens. Necroptosis also acts as an alternative “fail-safe” cell death pathway in cases where cells are unable to undergo apoptosis, such as during viral infection in which apoptosis signalling proteins are blocked by the virus.

Additionally, recent studies implicate it in a variety of disease states including myocardial infarction and stroke, atherosclerosis, ischemia-reperfusion injury, pancreatitis, inflammatory bowel disease and a number of other clinically common disorders.

The Necroptosis pathway is a form of regulated necrosis. It can be initiated by different stimuli, such as tumour necrosis factor (TNF), TNF-related apoptosis-inducing ligand (TRAIL), Fas ligand (FasL), interferon (IFN), LPS, viral DNA or RNA, DNA-damage agent and requires the kinase activity of receptor-interacting protein 1 (RIPK1) and RIPK3.

RIPK1 has important kinase-dependent and scaffolding functions that can inhibit or trigger necroptosis and apoptosis. Its execution involves ROS generation, calcium overload, the opening of the mitochondrial permeability transition pore, mitochondrial fission, inflammatory response and chromatinolysis. Necroptosis participates in various pathogenesis of diseases, including neurological diseases, retinal disorders, acute kidney injury, inflammatory diseases and microbial infections. Necroptosis can also be initiated by a ligand binding to death receptors, including tumour necrosis factor receptor 1 (TNFR1) & 2. Although many key proteins are implicated in the necroptotic pathway, quantifying the mixed lineage kinase domain like pseudokinase (MLKL) protein phosphorylation state, remains one of the most characterised methods to detect necroptosis. 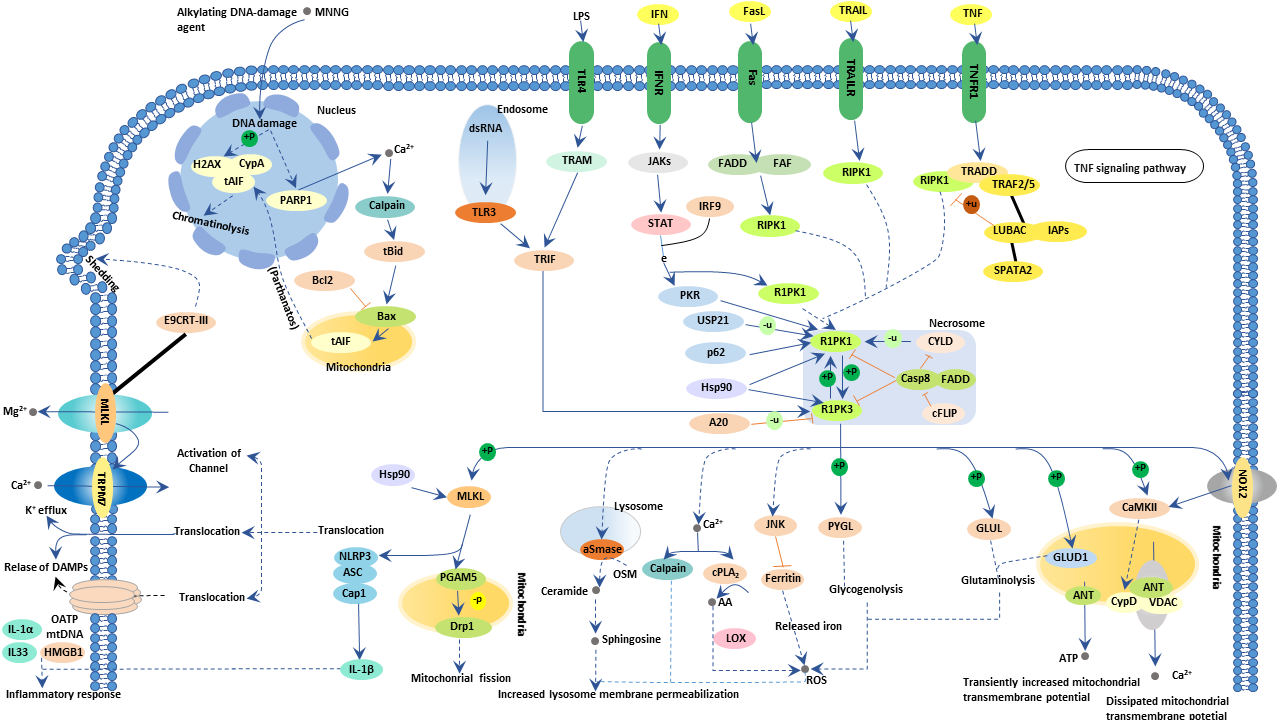 Pyroptosis is a highly inflammatory form of cell death that is triggered by proinflammatory signal. Pyroptosis occurs most frequently in inflammatory cells such as macrophages and may be trigged by during infections, thus, pyroptosis is likely to form part of the antimicrobial response. Pryoptosis supports the rapid clearance of various pathogens including protozoan, viral, fungal & bacterical infections by removing intracellular replication sites and increasing the host’s defensive responses . One of the distinguishing features of pyroptosis is the requirement for the activation of the enzyme, caspase-1. Caspase-1 is activated during pyroptosis by a large supramolecular complex termed the pyroptosome (inflammasome) and subsequently mediates development of proinflammatory cytokines and secretion of interleukin-1 beta and interleukin-18 through inflammasome-dependent pathways. Pyroptosis mediated cell death occurs due to cellular membrane pore formation and cytoplasmic swelling, and leakage of cytosolic contents while DNA fragmentation and nuclear condensation may be observed.

Caspase-1 is activated during pyroptosis by a large supramolecular complex termed the pyroptosome (inflammasome) and subsequently mediates the maturation and secretion of interleukin-1 beta and interleukin-18.

Ferroptosis is activated by the failure of the glutathione-dependent antioxidant defences leading to the accumulation of lipid reactive oxygen species (ROS) production such a lipid peroxidation, leading to eventual cell death via oxidation. The Ferroptosis pathways is distinguishable by the large iron accumulation and lipid peroxidation during the cell death process. Stimulants that activate ferroptosis often directly or indirectly affect glutathione peroxidase. Glutathione Peroxidase is a cytosolic enzyme and plays a crucial role in ROS homeostasis via the reduction of hydrogen peroxide to water and oxygen as well as catalysing the reduction of peroxide radicals to non-toxic lipid alcohols and oxygen, thus eliminating the detrimental effects of high ROS cell concentration. Upon inhibition of Glutathione Peroxidase, the accumulation of unchecked lipid peroxidation & ROS significantly increases, eventually leading the cell towards oxidative cell death.

Cell death is a ubiquitous event to maintain tissue homeostasis. Historically, necrosis was long considered an accidental form of cell death during exposure to noxious stimuli and characterised by general membrane swelling and loss of membrane integrity and leading to a large localised inflammatory response. More recently, however, new pathways have been identified, most prominently necroptosis. Necroptosis is a distinct form of cell death from the traditional necrosis/apoptosis cell death paradigm. Necroptosis involves several signals but can be activated and regulated by receptors including TNF or Fas – both of which are involved in the extrinsic apoptosis pathway.

Activation of specific death receptors initials a signalling cascade and the initiation of kinase RIP1, leading to various intracellular activations that lead the cell toward energy depletion and the eventual loss of intracellular homeostasis and the rupture of the cellular membrane. This rupture, and the consequential release on intracellular components triggers and inflammatory response and the activation of various immune cells.