Protein phosphorylation is very important for protein post-translational modification that controls many cellular processes including metabolism, transcriptional and translation regulation, degradation of proteins, cellular signaling and communication, proliferation, differentiation, and cell survival [1]. Approximately 35% of human proteins are phosphorylated. Phosphoproteins are low in abundance, and, therefore, are, sometimes, challenging to detect and characterize by Western blot and other methods. Western blot is the most common method for detecting and quantifying phosphorylated proteins. Western for phosphoprotein is not really different from a regular Western blot but following factors need pay attention to in order to obtain consistently results. Although all factors are important, protein sample preparation is possibly the most critical and deserve in-depth exploring.

Avoid Using Milk for Blocking. Milk contains casein, an abundant phosphoprotein that can cause high background when milk is used to block the membrane. When doing your Western blot, you should use an alternative blocking solution such as bovine serum albumin, or other non-milk blocking agent such as WB Blocking Solution (Cat# WA-008, Invent Biotechnologies). 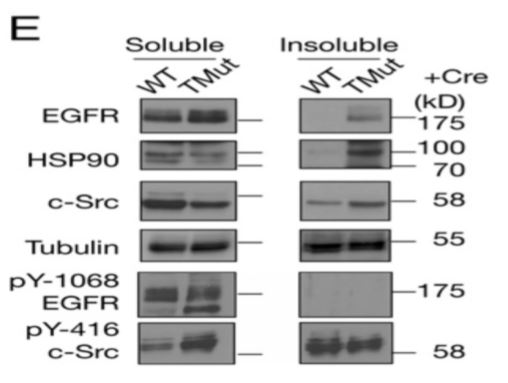 Beta integrin is a phosphoprotein, treatment with cytochalasin D causes an alter distribution of phosphorylated integrin between the Chaps soluble and insoluble fraction [8]). When a sequential protein extraction of primary chicken embryo fibroblasts was performed using Chaps, RIPA and Laemmli sample buffers, large amount of integrin was found in both Chaps insoluble and RIPA insoluble fractions for all five samples tested (Figure below). 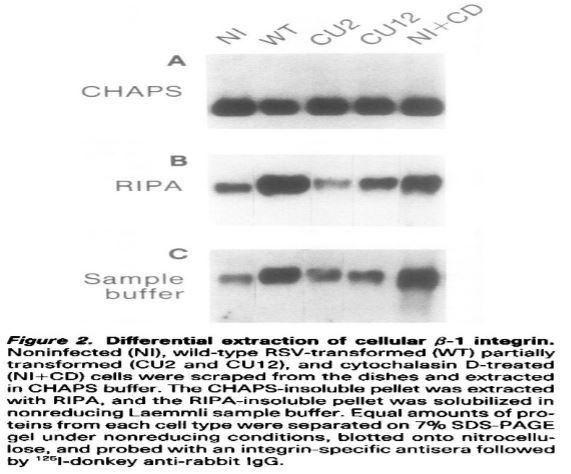 Tyrosine phosphorylation of caveolin-1 (P-Cav-1) was found to be mediated by activation of p38 mitogen activated kinase and c-Src kinase. Caveolin phosphorylation can be induced by 600 mM sucrose in 10 min. In this study [9], the cell lysate was prepared by Laemmli lysis buffer instead of RIPA buffer because this protein was found exclusively in RIPA insoluble fraction (see NIH3T3 cell lysate figure below). 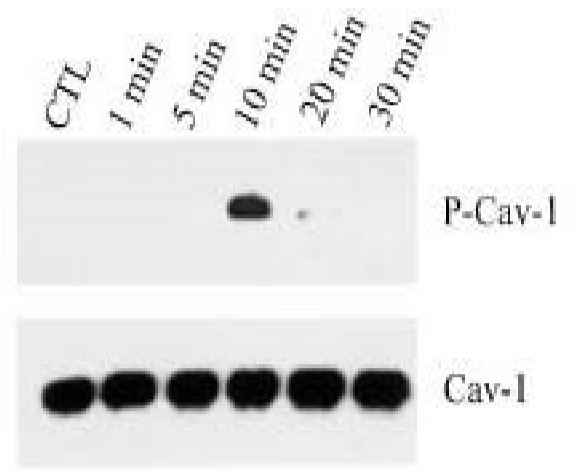 When NIH 3T3 cells were extracted by Triton-X-100 and RIPA buffer, caveolin is not detected in soluble fractions. It was exclusively found in insoluble fraction of these buffers [10 and figure below]. If RIPA soluble fraction were used in this case for detection of phosphorylation. The P-Cav-1 would have been missed. 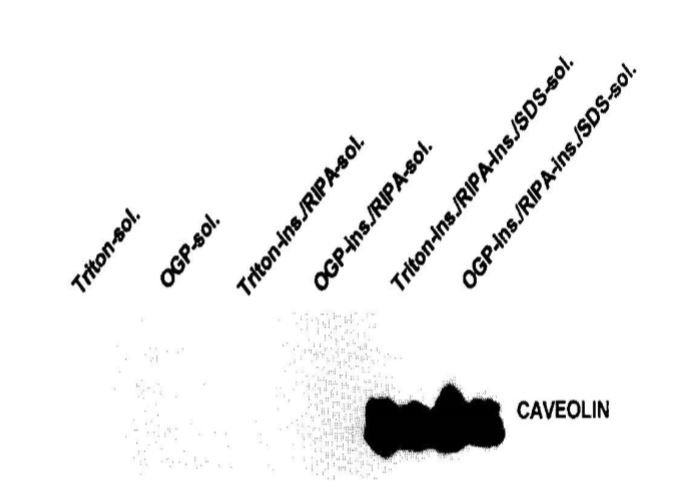 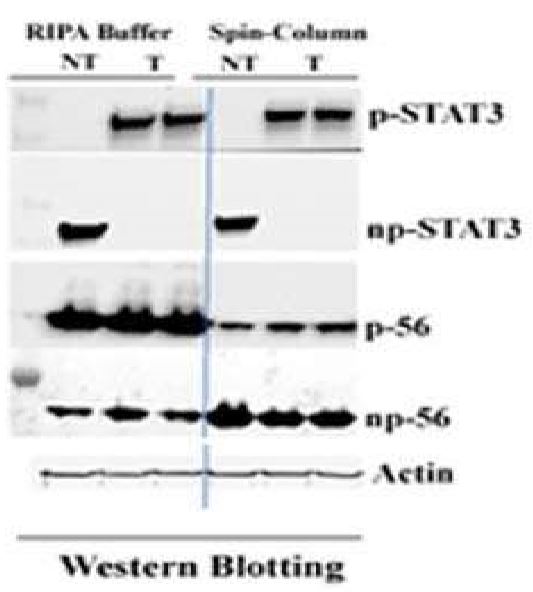 The results show that There is no difference between SD-001 and RIPA buffer for both treated (T) and Not treated (NT) samples in regard to the patterns of stat3. However, the phosphorylation pattern of p-56 is quite different. In SD-001 lysate, phosphorylated p-56 shows an increase from the base line level (NT) after a chemical stimulation (T) with a concomitant reduction in un-phosphorylated form, while RIPA buffer extracted sample is just the opposite. The phosphorylated p-56 in treated (T) sample is less than base line level (NT). This observation is against expected result. Although the precise reason is not clear, inadequate protein sample preparation could be a possible cause. In addition to protein loss during extraction process, RIPA buffer was also found to artificially increase the kinase activity and potentially affects protein phosphorylation [11]. As a summary, Detection and quantification of phosphorylated proteins by Western blotting is a common practice. Many factors can affect the results. When a phosphoprotein signal is not detected or weakly detected, improper protein extraction protocol may be responsible in addition to other potential problems discussed above. Therefore, selection of a proper sample preparation method is critical for successful detection and quantification of phosphoproteins.