Tau is a protein that stabilizes microtubules in neurons. Tau proteins are primarily located in axons, but can be found in dendrites and other parts of neurons.  In certain neurodegenerative diseases, known as tauopathies, tau becomes detached from microtubules and forms insoluble aggregates in the brain.

Alzheimer’s Disease (AD) is the most common neurodegenerative disease, affecting 10% of seniors over the age of 65.1 It was named after Alois Alzheimer, a German scientist who discovered tangled bundles of fibrils where neurons had once been in the brain of a deceased dementia patient in 1907.2 AD is characterized by plaques containing amyloid beta and neurofibrillary tangles (NFTs) containing tau. 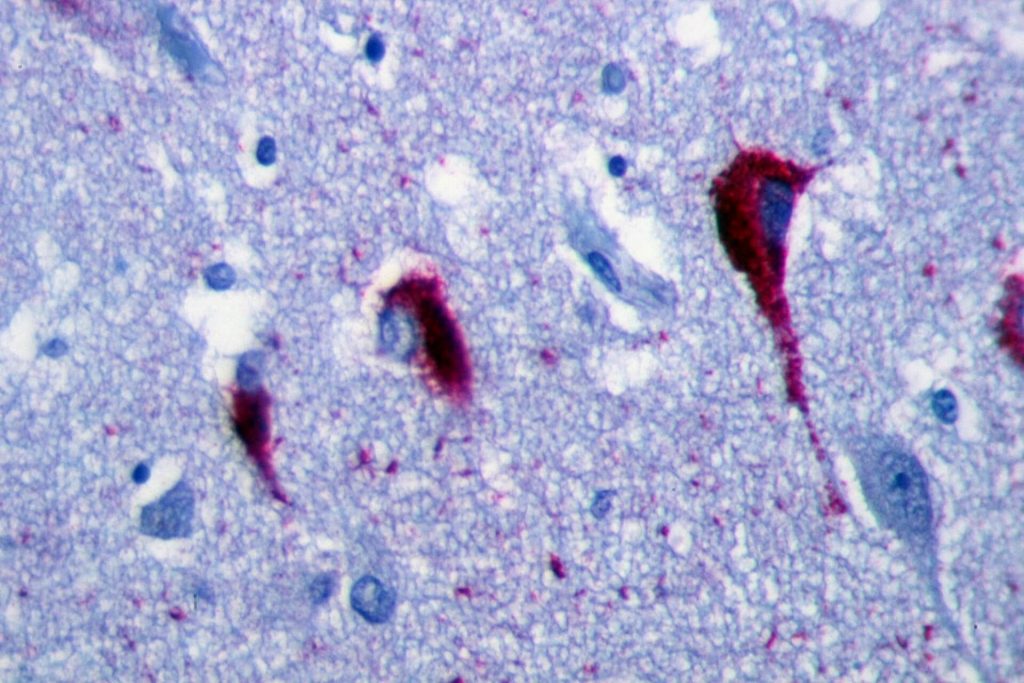 Tau is normally highly soluble3 and has no well-defined secondary or tertiary structures.4 It consists of four regions: the N-terminal region, the proline-rich domain, the repeat domain region, and the C-terminal region.5 Overall, the protein is hydrophilic.6  Unbound tau in the cytoplasm is thought to have a “paper-clip” conformation, where the N and C terminals are close together.7

Tau is encoded by the MAPT gene, located on human chromosome 17.  There are six isoforms in the adult human brain, which are generated by alternative splicing of the tau gene. There are three isoforms with three microtubule binding repeat motifs (3R) and three with four microtubule binding repeat motifs (4R).8 Isoforms range 352-441 amino acids and from 60-74 kDa.5 In the fetal human brain, only the shortest isoform is expressed.9

Tau dissociates from microtubules, leading to their destabilization. It then aggregates into oligomers, paired helical filaments, and ultimately neurofibrillary tangles.

Tau can undergo a variety of post-translational modifications (PTMs) including phosphorylation, glycation, nitration, O-GlcNAcylation, acetylation, oxidation, ubiquitination, sumoylation, and methylation.12 These PTMs regulate tau’s binding affinity to microtubules.13 High levels of ubiquitinated tau are found in AD and other tauopathies,12 and lysine acetylation and other PTMs impair tau function and promote aggregation.10  Acetylation of K280 is detectable in transgenic mouse models of tauopathies but not in control mouse brains,14 suggesting it may be linked to tau pathology. While many post-translational modifications of tau occur, the most studied is phosphorylation.

Two hyperphosphorylated tau monomers can combine to form dimers.8 This dimerization involves interactions between hexapeptides in repeats 2 and 3 and can lead to subsequent oligomerization.16  Oligomers then aggregate into PHFs, which have a twisted double-helical ribbon structure.17 Tau that is contained within PHFs is more negatively charged than monomeric tau, and cannot bind tubulin or stabilize microtubules as effectively.18 Without stabilization, the microtubule network decays and neurons cease to function.

NFTs are filamentous, insoluble aggregates of tau with an increased beta-sheet structure,19 consisting of aggregated PHFs. The degree of NFT deposition in the brain is associated with dementia severity20 and neuron death.21 Other forms of tau aggregates in AD patients include neuropil threads and neuritic plaques, which also induce neuron degeneration.22 However, some research suggests that filamentous and fibrillary tau may have some neuroprotective effects and that soluble, hyperphosphorylated tau oligomers are the most toxic form of tau.23

One proposed mechanism for the propagation of tau pathology is “prion-like propagation.” This involves the transfer of tau ‘seeds’ or fibrils from a donor cell to a recipient cell, where they recruit endogenous tau proteins onto their ends.24 While it appears tau fibrils spread similarly to prions, it is unclear whether tau shares other properties as prions, such as the possibility of human-to-human infection.25

Preformed fibrils (PFFs) can induce aggregation of tau in both cultured cells25 and living animals13 by recruiting soluble monomers to form insoluble fibrils. Introducing minute quantities of tau PFFs into tau-expressing cells can cause large amounts of tau to be recruited into “filamentous inclusions resembling NFTs.”27  Synthetic tau PFFs can also enter non-neuronal cells and recruit tau into NFTs.28

Some research shows that full-length tau PFFs seed aggregation more effectively than truncated K18 tau in primary neurons.28 However, co-expression of truncated and full-length tau was shown to induce severe but reversible neurotoxicity in mice.29 This may be due to the formation of soluble, non-filamentous, high-molecular weight oligomers that are toxic to neurons.29

Several approaches to potential treatments for AD and other tauopathies involve targeting the tau protein.  Treating tau hyperphosphorylation, which is controlled by protein kinases and phosphatases,34 could involve inhibiting tau kinases, restoring protein phosphatase 2A, or targeting the O-glycosylation of tau.35 Targeting neuroinflammation is also an option, since it plays a role in tau propagation.15 Immunizing mice with tau antibodies has been shown to slow the disease progression,36 which suggests immunotherapy could be a promising treatment option.