Cas9 (CRISPR associated protein 9) is an RNA-guided DNA endonuclease enzyme associated with the CRISPR (Clustered Regularly Interspaced Short Palindromic Repeats) adaptive immunity system in Streptococcus pyogenes. S. Pyogenes utilizes Cas9 to remember and later probe and cleave foreign DNA, such as invading bacteriophage DNA or plasmid DNA. When the DNA substrate is complementary to the guide RNA, Cas9 cleaves the invading DNA. This ability to make site-directed double strand breaks in DNA has led to the use of Cas9 protein as a genome engineering tool. As an RNA-guided DNA endonuclease, Cas9 can be directed to specific target cleavage sites by altering the guide RNA sequence. The nuclease-deactivated form of dCas9 further provides a versatile tool for biomedical research and therapeutics. 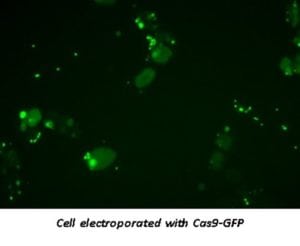 Compared to transfection with Cas9-expressing plasmid, delivery of purified Cas9 protein directly into cells by electroporation is relatively straightforward and may reduce the risk of issues associated with plasmid-based transfection, such as random integration of plasmid into the host genome. The presence of a nuclear localization signal (NLS) localizes the Cas9 RNP complex to the nucleus immediately upon entering the cell with the need for transcription or translation compared with mRNA or plasmid systems. Additionally, the Cas9 RNP complex is rapidly cleared from the cells minimizing the chance of off-target cleavage when compared to other systems. There is no need for transcription or translation processes. 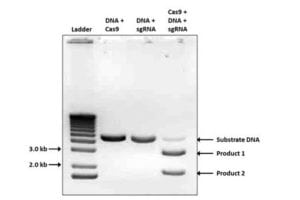 Cas9 NLS (PR-137211), is a recombinant dCas9 from S. pyogenes which contains Simian virus 40(SV40) T antigen nuclear localization sequence (NLS) on the N- and C- termini of the protein and is used to create double blunt end for recombination. The protein is transfection-ready for gene editing, also used for sgRNA or crRNA screening.

NLS-dCas9-NLS (PR-137213B) is an engineered, nuclease- deactivated Cas9 (dCas9) protein, has been used to regulate endogenous gene expression and labelling of genomic loci in living and fixed cells. The protein has been mutated CRISPR-associated endonuclease Cas9 (amino acids 1 to 1368) with D10A & H840A (ACCESSION: AKS40378 for Cas9). To facilitate nuclear entry, two nuclear localization signal sequence (NLS) are fused to both N- and C-terminal of dCas9 protein.

for subcellular localization of the Cas9-gRNA/target DNA complex.
NLS-Cas9-EGFP (PR-137211E) is a fusion protein containing a nuclear localization sequence (NLS) on its N terminal and EGFP on the C terminal. The EGFP can be taken as a reporter for tracking or sorting transfected cells, to enrich for cell populations containing the desired genome edits by fluorescence activated cell sorting (FACS). It significantly reduces the labour and cost associated with single cell cloning and genotyping in genome editing applications. 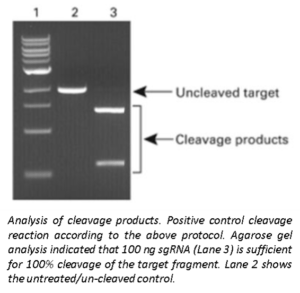 The sgRNA Screening Kit (NB-GEN10642) is designed to quickly assess in vitro the potential efficiency of a sgRNA sequence in vivo. The design of single guide RNA (sgRNA) is dependent on the target region close to the PAM site. Because the specificity and activity of each sgRNA is unpredictable, it is often recommended to design multiple sgRNAs to target a gene of interest. This kit provides a simple, reliable, and rapid in vitro method to assess single guide RNA (sgRNA) efficiency before cell transformation, to identify the most effective CRISPR sgRNA from a pool of sgRNAs, in as little as 2 hours.

This rabbit polyclonal IgG (SH-A16959) recognizes both Cas9 and dCas9 (nuclease-deactivated Cas9) based on the antigen design. It is suitable for us in ELISA,Western Blot,Immunofluorescnece, ChIP, Immunoprecipitation assays. 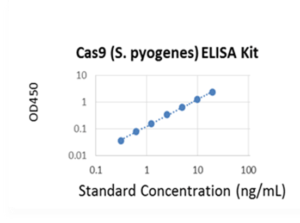 The CRISPR/Cas9 Protein ELISA Kit (Colorimetric) (NB-E1372PR) is designed for measuring Cas9 level in whole cell extracts or purified Cas9 proteins from various cells and tissues. In an assay with this kit, the Cas9 proteins in samples are tightly and stably spotted on the strip wells. The bound Cas9 proteins can then be recognized with detection antibody followed by a colour development reagent. The ratio of Cas9 is proportional to the intensity of absorbance. The absolute amount of Cas9 can be quantitated by comparing to the Cas9 control.