Caprico Biotechnologies, Inc. was founded in 2013 by a group of experienced scientists with broad research experience in immunology. We saw a market need to provide a range of antibody related tools and services to support basic and clinical immunological researchers. Our vision and motivation is to become a trusted and leading solution provider to the immunotherapy industry by developing innovative products that provide adequate evaluation tools for the treatment of cancer and autoimmune diseases in academic and clinical studies.

A fluorophore is a fluorescent chemical that can re-emit light upon excitation. Fluorophores can be used in conjugation with protein or oligonucleotides to generate fluorescent markers for detecting the expression of proteins and nucleic acid. Fluorescent labels functionally accept light energy of a given wavelength (e.g., from a laser) and re-emit energy at longer wavelength. These two processes are known as excitation and emission.

Different types of fluorophores are used in flow cytometry based on the instrument setting (see lasers and detection channels in Figure 1), the feature of fluorophores, and markers needed in designated panels such as four, six, or ten color panels.

Figure 1 Brand names of Flow Cytometer and its laser and channel setting. 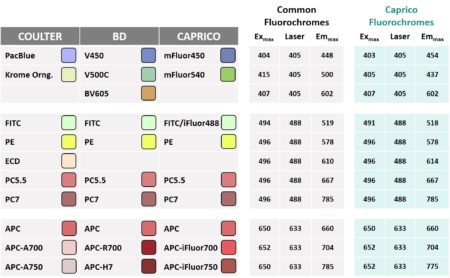 Figure 2 Caprico Biotechnologies’ 10 Color Panel, and the Spectrum of Most Used Fluorophores.

Dyes such as FITC, PE, APC and PerCP have become the standard for many years. Tandem dyes, comprising a small fluorophore covalently coupled to a larger fluorophore, provide maximum utilization of specific equipment, increased detection channels for each laser, and generate more information for valuable, sometimes very limited, samples.

Commonly used fluorophores for surface or intracellular epitope detection are described in Figure 2.

There are many fluorophores that have potential applications in flow cytometry. A new generation of small molecule fluorophores such as Alexa Fluor, iFluor, and mFluor are rapidly replacing many traditional fluorophores, providing users with greater light stability and brighter fluorescence. CBI offers these high-performance fluorescent dyes: iFluor™ and mFluor™ series.

mFluor™ fluorophores are developed specifically for flow cytometry applications, to enable optimal multicolor detection. These dyes show large Stokes shifts and excellent water solubility. mFluor™ dyes span the full UV-visible spectrum and are designed to maximize excitation efficiency with one of the major light sources in flow cytometers such as the violet laser (405 nm) or the blue laser (488 nm). They are excellent alternatives to the phycoprotein-based tandem dyes that are quite difficult to couple to antibodies or other biomolecules.

Caprico Biotechnologies, Inc. (CBI) is an ISO9001:2015/ISO13485:2016 certified facility providing high-quality purified and fluorochrome-conjugated anti-human antibody products used in flow cytometry applications for both clinical research (RUO) and clinical diagnostics (ASR). As a start up company located in Norcross, GA, CBI is fueled by a group of highly skilled PhD scientists. We currently offer products conjugated with 16 fluorochromes derived from greater than 100 clones, useful for immunophenotyping of normal, activated (infection), and abnormal (autoimmune diseases, cancer, etc) human immune cells through surface or intracellular staining. CBI products can also be used in pre- and post-treatment monitoring in patients with a variety of diseases such as leukemia and lymphoma, PNH, MDS, etc.

All CBI products are produced from well-known clones and their quality or staining performance is equivalent to the respective products of major competitors. Typical representative comparative flow cytometry analyses for T cells, B cells, and monocytes are shown in Figure 1.

Caprico Biotechnologies, Inc. (CBI) provides high quality ASRs for clinical flow cytometry applications. Our ASR products are manufactured under strict quality standards at each step of the manufacturing process in our cGMP facility in Atlanta GA, USA. All ASRs are tested to meet specifications and ensure consistent quality lot-to-lot.

Q: What applications are your products valid for?

A: All antibodies directed against human CD antigens are validated for use in flow cytometry. Please view the TDS for your specific product to verify which other applications your antibody is suitable for, as well as storage conditions, QC data, and much more.

Q: What are the optimal storage conditions for your antibodies?

A: Caprico Biotechnologies offers multiple antibody clones which are cross-reactive with different non-human primate (NHP) species. Species reactivity and conjugates tested can be found in the respective TDS, some data are available in the resources section.  For detailed information about our NHP reactive products and the possibility of obtaining free product in exchange for test data, please contact our technical support.

Q: What volume of antibody do I need to add to my samples to guarantee accurate data and appropriate results?

A: The recommended test volume is indicated on the outer label of the product and on the TDS for that product. We recommend that every lab carries out an initial titration study before running your samples to ensure that the optimal concentration is selected for your application.

Q: How do I select an appropriate isotype control for any one of your products?

A: The isotype of any of our antibodies can be viewed in the “Isotype” field next to the clone name. Also, on the TDS for any given antibody, the “Host/Isotype” field will inform you about the isotype of that particular antibody. Once the correct isotype has been identified, just type “Isotype Control” or similar text into the search bar on the webpage and select the appropriate isotype control with the correct format (purified, FITC, PE, PerCP, etc.)

Q: What can I do to preserve my samples if they cannot be run immediately?

A: It is always best to use fresh samples, however there are measures you can take to preserve your samples for a later date. After completing your staining protocol, incubate your samples in fresh 1% paraformaldehyde for 5 to 10 minutes at room temperature. After incubation is complete, place your samples at 4°C without light exposure for up to 3 days.

Caprico can be a part of your clinical trial/research projects

Our Analytical Department is equipped with flow cytometers capable of performing analysis up to 13-color in either single sample tube or 96-well format useful for detection of any type of human cell isolated from whole blood or other bodily fluids.

What Caprico can do for you

At Stratech, we specialise in providing a comprehensive range of monoclonal antibodies (mAbs) for scientific research. We partner with state-of-the-art Read More...

What is Autophagy? Autophagy (namely self-eating) is a highly conserved process for disassembling intracellular excess and dysfunctional components such as Read More...

What is Apoptosis Apoptosis is a form of programmed cell death that occurs in multicellular organisms and has multiple functions Read More...

Resources for the Study of the Immune Response to SARS-CoV-2 and Other Viruses When a virus infects a host it Read More...