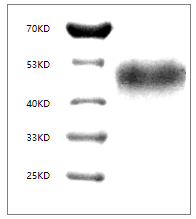 Description: The cluster of differentiation (CD) system is commonly used as cell markers in immunophenotyping. Different kinds of cells in the immune system can be identified through the surface CD molecules which associating with the immune function of the cell. There are more than 32 CD unique clusters and subclusters have been identified. Some of the CD molecules serve as receptors or ligands important to the cell through initiating a signal cascade which then alter the behavior of the cell. Some CD proteins do not take part in cell signal process but have other functions such as cell adhesion. Cluster of differentiation 24, also known as signal transducer CD24 or heat stable antigen CD24 (HSA), is a mucin-type glycosylphosphatidylinositol-linked glycoprotein expressed on the surface of B-cells, differentiating neuroblasts and many tumors. May have a pivotal role in cell differentiation of different cell types. Signaling could be triggered by the binding of a lectin-like ligand to the CD24 carbohydrates, and transduced by the release of second messengers derived from the GPI-anchor. Modulates B-cell activation responses. Promotes AG-dependent proliferation of B-cells, and prevents their terminal differentiation into antibody-forming cells. In association with SIGLEC10 may be involved in the selective suppression of the immune response to danger-associated molecular patterns (DAMPs) such as HMGB1, HSP70 and HSP90. Plays a role in the control of autoimmunity.