We have researchers who have shared able to offer some collection tips.  From Harvard University –Brigham and Women’s Hospital.
Their group collects saliva samples with the Infant Swab from premature babies from 2 lb.  Sometimes they do get only 150-200 uL volume, and you could test in singlet when volume is low.   Position the end of the swab between the cheek and bottom gum on the resting side of the infant’s head to collect pooled saliva.
For premature or those infants in the NICU or not able to hold their head up , these infants will not have saliva pooling under their tongue, but along their cheek and lower gumline.
You may think of those who are able to hold their head up, thrusting their tongue and showing signs of ready to eat baby food as the infants who will have saliva under the tongue.You can also see a collection video on our YouTube Channel , but this is  for infants who are able to hold their head up.    https://www.youtube.com/watch?v=zkPQtNrnt8Q
Remember, it’s the end of the swab that is most absorbent, by a long way – the side of the swab is much less absorbent, so you need to place the end in the saliva as shown: 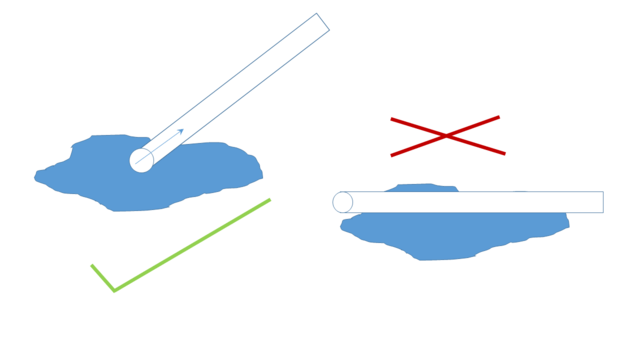 It may take a few re-introductions – in and out as the baby tolerates the swab. You should try to have the swab in the infant’s mouth for a combined total of 90 seconds.
It might take a little longer if your newborn has a dry mouth or is on caffeine or other medications. For cortisol testing, we say to keep the collection time within 2-5 minutes for this population.With some patience and connecting with the baby, you can do it!

1. We would always try to collect right before the babies were supposed to be fed. If the babies are hungry they will start to salivate more on their own. This might be tricky for the 48 hour time window because they won’t be on much of a feeding schedule yet but always worth a try anyway.

2. Because we were collecting in preterm infants who were usually in cribs or incubators we would always turn the babies so their heads were on their sides so as to allow any saliva in the mouth to pool in the back of their cheek.

5. We also used the same two people to collect samples for our study so she and I became familiar with the collection procedure and throughout our longitudinal study we became familiar with which babies were naturally producing more or less saliva and some of the signs to look for when determining if the swab was collecting or not.

6. Another tip is that I made sure to collect all the samples and then centrifuge them immediately after collection while they were still at room temperature and this seemed to give us the greatest volumes of saliva collected rather than refrigerating them until you get to centrifuge them later.

Some other answers to questions –

1. The core of the swab is referring to the part you see when you look at the circular shape of the swab. The outer circle of the swab from that end is not absorbent, just the middle filling.

2. I have not tried to syringe the swabs although I have read in other manuscripts that it is a good method. When we centrifuged the swabs we were getting enough saliva so we didn’t necessarily need to syringe but maybe you could try to centrifuge and then squeeze and syringe anything left over or the other way around, syringe and then centrifuge. I know that would be an extra step for you but it took us a while to perfect the protocol that worked best for us so take your time and get it right and it will really help your project in the end.

3. All of the babies we swabbed were awake. I would highly recommend waking up a baby that you are about to swab if that is alright with the family as this will stimulate the baby to start to produce saliva.