Exo-Fect is a novel nucleic acid transfer agent that enables the transfection of nucleic acids directly into isolated exosomes. The transfected siRNA, microRNA, mRNA or even plasmid DNA can then be shuttled into target cells via the transfected exosome vesicles. Simply combine isolated exosomes with Exo-Fect and the nucleic acid of your choice to generate exosome delivery vehicles. The protocol takes less than an hour and is highly efficient at placing nucleic acids into exosomes for transport. All Exo-Fect kits come with a Texas-Red labeled positive control, non-targeting siRNA to confirm exosome transfections. The term “FedExosomes” was coined by Dr. Michelle E. Marcus and Dr. Joshua N. Leonard in their article, “FedExosomes: Engineering Therapeutic Biological Nanoparticles that Truly Deliver”published in Pharmaceuticals (Basel), May 2013; 6(5): 659-680. 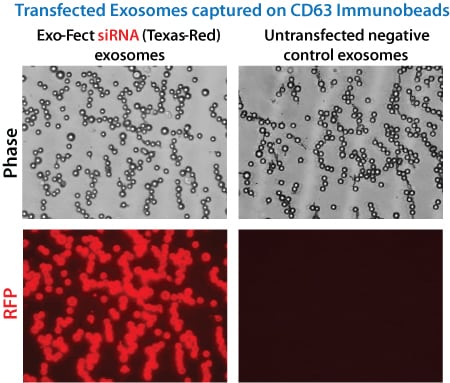 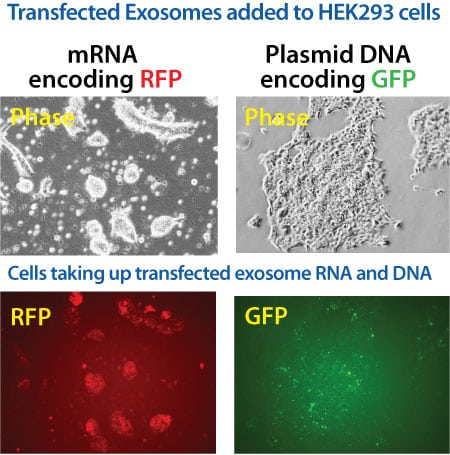 xoFect kits work with longer RNAs, like mRNA. We transfected 1 ug of an mRNA encoding RFP into exosomes. These exosomes were then added to HEK293 cells and imaged for RFP protein production after 24 hours. Exo-Fect also enables the transfection of plasmid DNA into exosomes. We used 5 ug of plasmid DNA encoding a GFP gene, transfected exosomes and then added to HEK293 cells. The cells were imaged for GFP protein presence after 48 hours. The image data are shown below. 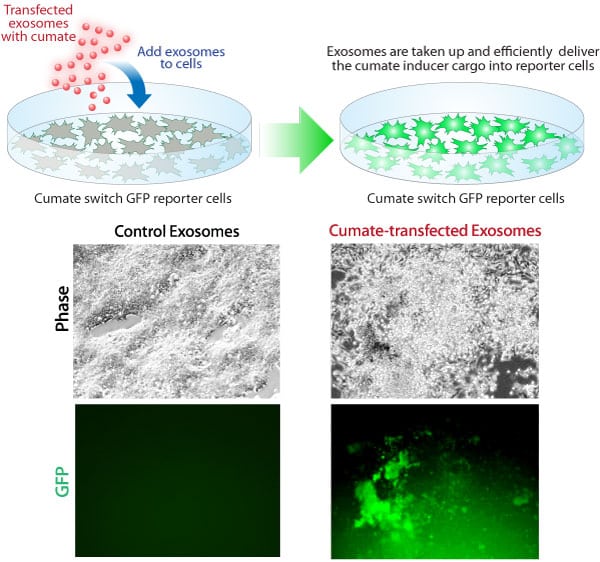 Small moleculae drugs can also be Exo-Fected into exosomes for delivery to target cells. SBI’s cumate system features a cumate switch promoter that is highly suppressed by its cognate CymR repressor protein abd can switch on with the addition of the small moleucle inducer, cumate. We tested the loading of cumate into exosomes using the Exo-Fect system and then added those exosomes to cells containing a cumate switch GFP reporter construct. The control exosomes were untransfected exosomes
and the cumate-transfected exosomes were treated with Exo-Fect and 450 ug cumate solution. The experimental approach and reporter HEK293 cell data are shown below. The Exo-Fect technology is able to successfully load small molecule drugs into exosomes that are then able to deliver the drug to target cells.

The ExoQuick serum reaction size is based on using 250 µl serum for exosome isolation and ExoQuick-LP is based on a 100 µl starting serum sample.