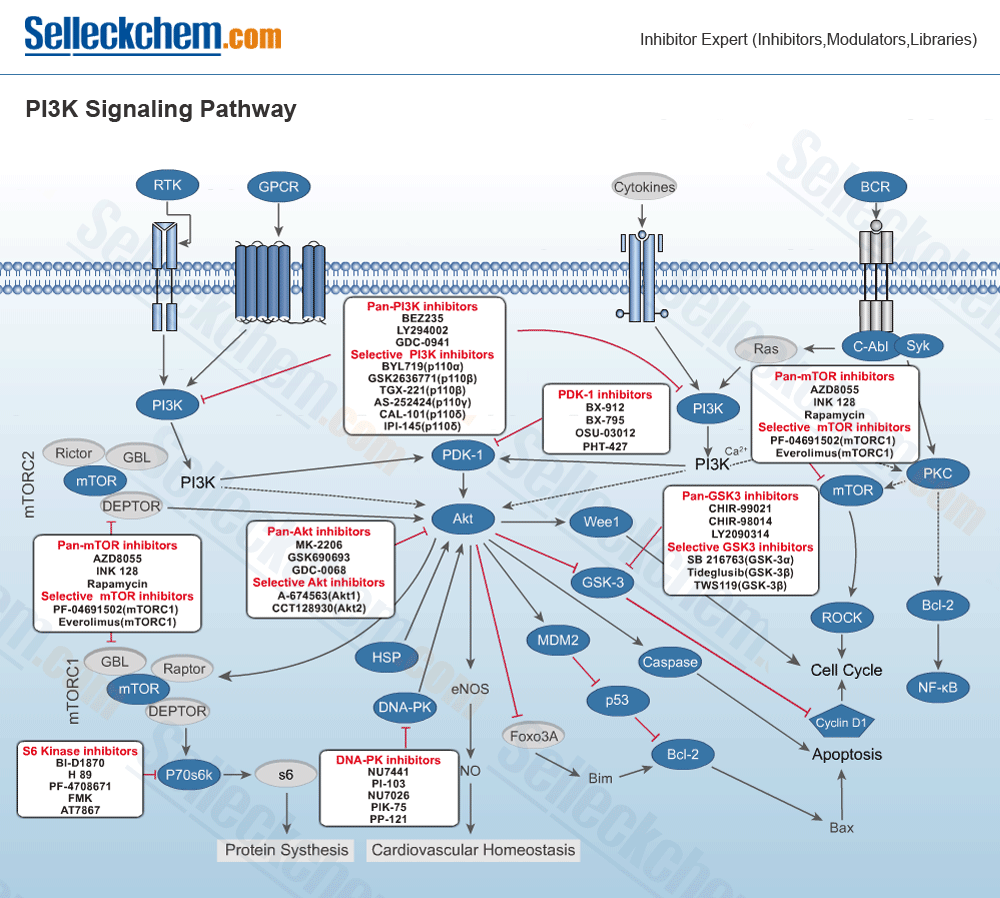 THE PI3K FAMILY MEMBERS
All PI3K family members have the ability to phosphorylate the 3-hydroxyl group of phosphoinositides [9]. They could be generally classified into three classes according to their primary structure, regulation, and in vitro lipid substrate specificity [34]. Class I PI3Ks are heterodimers containing a regulatory subunit and a catalytic subunit, which might be involved in malignant transformation in many different cancer types. The genes of PIK3R1, PIK3R2 and PIK3R3 encode the regulatory subunit, namely p85 (α, ß and γ) [38]. p110 is the catalytic subunit of class IA PI3K. The function of PI3K enzymes is mainly depended on it. There are four isoforms of p110: α, ß, γ and δ, which are encoded by the genes of PIK3CA, PIK3CB, PI3KCG and PIK3CD, respectively. Among the rest, p110-αis involved in the growth of cell and is the isoform which is often out of control under cancer state. In addition, class II PI3K enzymes are monomeric and involved in cell surface trafficking, whereas class III PI3K enzymes are implicated in the regulation of autophagy [38].

ACTIVITY CONTROL
The class IA PI3K enzyme complex is closely associated with phosphotyrosine residues on the intracellular membrane portion of RTKs. Under normal state, p85 locks the catalytic site of p110 subunit. Once the RTK was activated by its ligands, the catalytic site of p110 was expose. As a result, phosphatidylinositol 3,4,5-triphosphate (PIP3), as a second massager, was released at the cell membrane. This process could be regulated by phosphatase and tensin homolog (PTEN), which cut off the signal by metabolize PIP3 into PIP2. Therefor, lack of PTEN often lead to hyperactivation of PI3K pathway signaling. Another tumor suppressive factor named inositol polyphosphate 4-phosphatase type II (INPP4B) was found to negatively regulate the PI3K pathway by converting PIP2 into PIP [19]. Dual knockdown of INPP4B and PTEN in human epithelial cells has been shown to result in cellular senescence [19]. The PI3K pathway can also be mobilized by RAS, which could directly activate the catalytic subunit p110 [12].

MECHANISM OF ACTION
PIP3 recruits cellular proteins containing lipid-binding domains to cell membranes and binds to the pleckstrin homology domain in the N-terminal region of AKT. In this manner, PIP3 induces a conformational change in AKT revealing two amino acid, Thr308 and Ser473, and facilitate the full phosphorylation of Akt [47]. mTOR, also known as FKBP12-rapamycin-associated protein (FRAP), is a 280 kDa serine/threonine kinase downstream of Akt. mTOR is the nuclear catalytic subunit of two complexes: mTORC1 and mTORC2 [66]. mTORC1 is comprised of mTOR, Raptor, mLST8, and PRAS40 (a mTOR inhibitor). This complex presented classic features of mTOR as a nutrient or energy sensor and protein synthesis conditioner [16; 22; 29; 30; 46; 51]. The activated mTORC1 showed a negative feedback inhibition on PI3K signaling [61]. Different from mTORC1, activated mTORC2 could induce the phosphorylation of Akt at serine 473 and serving as a positive feedback on PI3K signaling cascade [53].

PI3K AND PAIN
Recently, several lines of evidence suggested the involvement of PI3K signaling cascades in the regulation of central and peripheral sensitization. The increased activation of Akt was often found in DRG and dorsal horn neurons [11; 48; 49; 57; 59; 60; 69]. Correspondingly, intrathecally injection of PI3K inhibitors suppressed nerve injury-induced (Xu et al., 2007) and chemical-induced [11; 48; 60] hyperalgesia. Furthermore, spinally inhibition of mTOR by rapamycin showed well anti-nociceptive effect in some animal pain models [5; 18; 28; 45; 50]. It suggested that PI3K pathway might be a potential target for the development of novel analgesics.

PI3K AND PROTEIN SYNTHESIS
What’s more, in young animals, a big mount of new protein synthesis are required in the nervous system development processes, like axon guidance and synapse formation [7; 8; 41; 67]. It was reported that BDNF induced translation of the Homer2 and GluR1 mRNAs in synaptoneurosomes could be well inhibited by using the specific PI3K–mTOR kinase inhibitors rapamycin and LY294002 [55]. Thus, the PI3K / Akt / mTOR related mRNA translation and protein expression seems to be more significant.

PI3K AND NEURAL PLASTICITY
On the other hand, in adult animal or human being, new protein synthesis also plays important roles in many aspects, such as the modulation of long-term synaptic plasticity (LTP), which is associated with learning and memory, as well as pain sensation mentioned above [6]. Specifically, it has been found that the local protein synthesis in neurosynapse is essential for the function and morphology of nervous system [27; 40]. In previous research, rapamycin, the specific inhibitor of mTOR, significantly suppressed the plastic changes in postmitotic neurons [10; 62]. It suggested the core role of mTOR in neural plasticity. In addition, the phosphorylation of 4EBP, the very downstream molecule of mTOR, was increased in rat hippocampus after spatial learning [42]. It suggested that PI3K/Akt/mTOR signaling-dependent mRNA translation is involved in the higher brain function.

PI3K AND ONCOLOGY
In recent decades, PI3K pathway was most frequently mentioned in the area of oncology for the reason that PI3K was almost involved in all developmental processes of tumor or cancer. The oncogenic transformation of cultured cells as well as the progression of a variety of tumors in vivo has been reported to be induced by mutations or overexpression of p110 isoforms. Mutations affecting the expression or function of p110 isoforms could induce oncogenic transformation [21; 37; 52]. The carcinogenic activity of p110α has been confirmed in ovarian cancers patient. Increased PIK3CA gene copies correlated with the overexpression of the p110α subunit led to an enhancive role of PI3 kinase [56]. Overexpression of hyperactive p110β derived the development of a intraepithelial neoplasia in the prostate of mice [33]. Importantly, Akt is probable to be the mediator of p110β-induced tumorigenesis [26]. There is also evidence revealed that the progression of multiple B-cell malignancies could be induced by a constitutive activation of p110δ [32].

PI3K AND SYSTEMIC IMMUNE
Chronic inflammation is a major cause of cancer. Much studies demonstrate that PI3Ks activity is essential in regulating chemokine production and the migration of leukocytes in immune response. For instance, in vivo research showed that p110γ is required to allow chemotactic migration of immune cells to inflammatory sites [39; 54]. Moreover, the release of inflammatory factors, like IL-8, Mip-1α, and Mip-1β, by neutrophils in response to immune stimulus requires the activity of p110δ complex [17]. PI3K/Akt pathway has also been reported to be related to the immune recognition of tumor cells. It was found that DAP10, the NKG2D-associated adapter protein in natural killer (NK) cells, could anchor to the p85 subunit of PI3K and lead to the activation of Akt pathway. This signaling cascades then strengthen the production of chemokine by NK cells [31; 63; 65].

In some cases, the PI3K pathway is also responsible for the escape of  cells from immune system. A hyperactivation of Akt was found in a immune-resistant human papillomavirus type 16 (HPV-16) tumor cell line. It was thought to be responsible for the enhenced resistance of these cells to CD8 T-cell-mediated apoptosis [44]. Interestingly, cancer cells was found to suppress immune by some manners, including releasing immune-suppressive cytokines and chemokines, or inducing lymphocyte apoptosis [43; 64].

Due to the super activation of the PI3K signaling pathway in cancer cells, uncontrollable proliferation, survival and angiogenesis in various human malignancies had an opportunity to occur. Enormous efforts have been made for developing medicines targeting PI3K / Akt / mTOR pathway.

THE SPECIFIC INHIBITORS OF PI3K
Wortmannin and LY294002 are first-generation pan-PI3K inhibitors. Wortmannin, a furanosteroid metabolite of the fungi Talaromyces (Penicillium) wortmannii, is a specific inhibitor of PI3K. LY294002 was the first synthetic small molecule that reversibly inhibits the PI3K family members. Unfortunately, they have IC50 in micromolar range and displays similar potency for inhibiting the activity of Class I, II, and III PI3K members in vitro. In other words, they showed no selectivity for each PI3K isoforms. Furthermore, wortmannin or LY294002 displyed unfavorable pharmacokinetic properties and much toxicities in animals [4; 24; 35]. Thus it was failed to develop them into clinical drugs. However, these studies provide useful information of the PI3K signaling for the development of novel PI3K inhibitors.

In the following research works, isoform-selective PI3K inhibitors were reported. PI‑103 is able to inhibit both p110a and mTOR in glioma cells [15]. A Phase I study showed that a selective inhibitor of p110δ called CAL‑101 could be helpful with the treatment of hematologic malignancies in patients [25]. PX‑866, a pan-PI3K inhibitor, showed a mild side effect in part of the patients with solid tumors, such as squamous cell skin cancer and melanoma [2]. GDC0941, another pan-PI3K inhibitor, also displayed desirable anticancer effect in sarcoma, ovarian cancer and endometrial cancer patients [13].

THE SPECIFIC INHIBITORS OF AKT
Akt is another potential target for the therapy of cancer for the reason that Akt is one of the most important downstream molecule of PI3Ks. There are three isoforms of Akt: Akt1, Akt2 and Akt3. Perifosine, a PAN-Akt inhibitor, could bind to Akt and prevent Akt from binding to PIP3 and subsequent membrane translocation [23]. It has been in a Phase I clinical trial to treat solid tumors and lymphoma. A dual inhibitor of Akt1 and Akt2 named Akti‑1/2 showed potent antitumor activity in tumor xenograft models. MK2206, the analog of Akti‑1/2, is now in the Phase I clinical trial for the treatment of locally advanced or metastatic solid tumors and a Phase II study in advanced hepatocellular carcinoma [1; 3].

THE SPECIFIC INHIBITORS OF mTOR
As one of the key components of PI3K pathway, mTOR exists in two different complexes, mTORC1 and mTORC2. Rapamycin or sirolimus (Rapamune®; Wyeth, NJ, USA), which mainly inhibits the activity of mTORC1, presented well antitumor effect recently [14; 20]. However, for the bad solubility of rapamycin in aqueous solution, several rapamycin analogs such as Everolimus (RAD001/Afinitor®; Novartis, Basel, Switzerland) and temsirolimus (CCI‑779/ Torisel®; Wyeth) have been developed, which have been approved for the treatment of advanced renal cell carcinoma.

Under some conditions, inhibiting more than one target of PI3K pathway might lead to better effect. BEZ235, dual PI3K/mTOR inhibitor, inhibits Class I PI3K isoforms and mTOR kinase activity by binding to the ATP-binding pocket of PI3K. It has strong anti-proliferative effect on tumor xenografts and is now under Phase I/II clinical trials for breast cancer and endometrial cancer [1].