In biology, cell signaling is a network of communications that governs basic and complex cellular processes. Depending upon the nature of the signal, it can be classified as either biochemical or mechanical. Biochemical signals are generated by biochemical molecules such as proteins, lipids, ions or hormones. Detection of these biochemical agents may shed light on the state of that particular type of signaling pathway.

Disruption of signaling networks often leads to diseases such as cancer, immune diseases and metabolic disorders. By understanding signaling pathways, researchers and clinicians may be able to treat disease conditions effectively and efficiently. AAT Bioquest offers a broad range of assays to conduct cost-effective analysis of various enzymes, proteins or small molecules involved cell signaling pathways. Measure activities such as phosphorylation, methylation and acetylation with unparalleled sensitivity and reproducibility.

Adenosine diphosphate (ADP) is an important organic molecule that plays a major role in cell metabolism. It is a product of ATP dephosphorylation, a key reaction in living cells that is essential for energy transfer, and can be recycled back to ATP via rephosphorylation. This interconversion of ADP and ATP occurs primarily in the mitochondria and chloroplasts by ATPases such as phosphatases, phosphorylases and kinases. ADP is stored in dense bodies inside blood platelets. When platelets are activated, ADP is released to interact with a family of purinergic receptors thereby regulating cellular function.

The PhosphoWorks™ Fluorimetric ADP assay offers a sensitive method for monitoring ADP formation. In this enzyme-coupled assay, ADP formation is measured by monitoring kinase activity due to their proportional relationship. 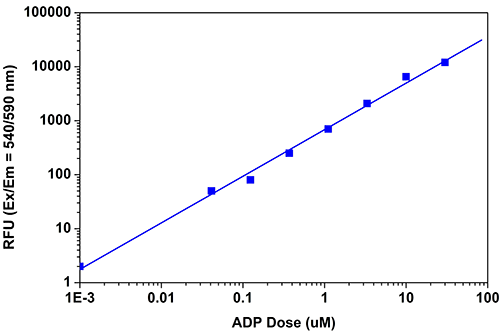 Adenosine triphosphate (ATP) is a complex organic molecule that participates in cellular energenics, metabolic regulation and cellular signaling. It is present in all living organisms as the primary energy currency and rapidly degrades in the absence of viable organisms. As such, ATP determination is a useful tool utilized in a variety of research applications to identify the presence of viable organisms. Common applications include cell viability and cytotoxicity, detection of bacterial on surfaces, quantification of bacteria in water, somatic cells in culture, and in food quality and contamination tests.

Our PhosphoWorks™ Luminometric ATP assays provide a fast, simple and homogenous bioluminescence method that can be used for the determination of cell viability, cytotoxicity and proliferation in mammalian cells by ATP detection. 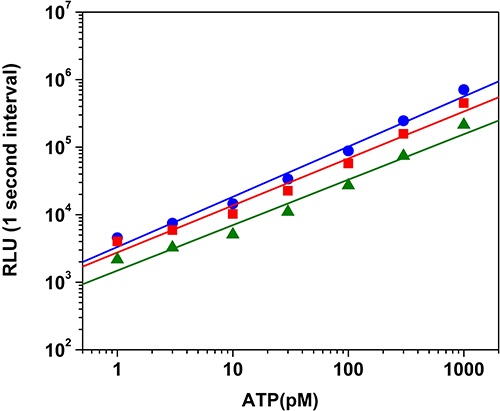 Cyclic Adenosine Monophosphate (cAMP) is a vital second messenger utilized in many biological pathways. It is utilized for intracellular signal transduction in many organisms, conveying the cAMP-dependent pathway, and is involved in the activation of protein kinases and ion channel regulation. cAMP is derived from ATP and synthesized by plasma membrane-bound adenylyl cyclase which are coupled to transmembrane receptors. Activation of adenylyl cyclase is initiated by a range of signaling molecules. These molecules interact with receptors, such as GPCRs, which initiate adenylyl cyclase activity and increase intracellular cAMP levels. Finally, cAMP activates cAMP-dependent proteins kinases that are responsible for phosphorylating specific substrate proteins. Determination of cAMP activity is useful for functional assays assessing receptor activation, receptor characterization, and receptor-ligand identification. 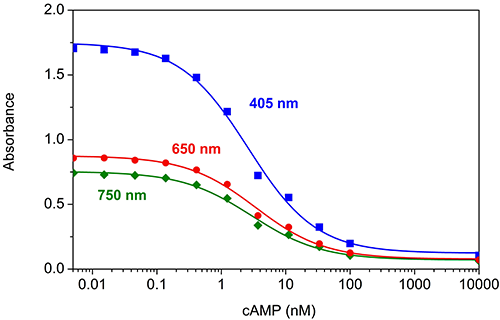 Figure 3. cAMP dose response was measured with Screen Quest™ Colorimetric ELISA cAMP Assay Kit (Cat#36370) in a clear 96-well plate with a SpectraMax microplate reader. The Absorbance can be read at 405 nm (blue line), 650 nm (red line) or 740 nm (Green line), the data in figure B are from the incubation with Amplite™ Green for 3 hours.