5-hydroxymethylcytosine (5-hmC) is a DNA modification that is – along with its analog 5-methylcytosine (5-mC) – an important epigenetic marker associated with critical cellular functions such as stem cell differentiation and brain development[1]. A specific detection of 5-hmC however, is not trivial since traditional sodium bisulfite sequencing does not distinguish between 5-mC and 5-hmC sites[2]. 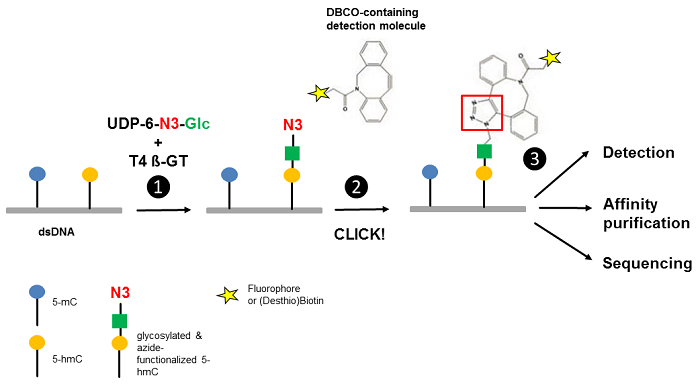 An easy and cost-efficient method for the preparation of 5-(hydroxy)methylated DNA fragments relies on 5-hydroxmethyl-dCTP (5-hmdCTP) or 5-methyl-dCTP (5-mdCTP) that is enzymatically incorporated into DNA with Taq polymerase instead of its natural counterpart dCTP.

5-(hydrox)ymethylated DNA fragments can subsequently be used as sequencing control [1-5] or for pull-down of 5-hydroxymethyl-binding proteins from cellular lysate[6].