Adipocytes are the major energy storage sites in the body and they also have critical endocrine functions. Therefore, understanding the development and function of adipocytes are essential to understanding metabolic homeostasis under physiological and pathological conditions. In recent years, proteomic research using adipose tissues are increasingly common [1]. It is relatively easy to extract total proteins from most cell types and tissues however it is much more difficult to extract high quality total proteins from adipose tissues. As shown below, there are basically three types of adipocytes (Brown, Brite and white). A common feature shared by all three cell types is high lipid and low protein content. In average, the protein content accounts for less than 2% of total cellular mass, making it technically very challenging to isolate high concentration total proteins from adipose tissues [2].

In adipocytes, the majority of cellular volume is occupied by lipid droplet. Cytosol and nucleus account for very small volume. Cellular proteins are highly heterogenous in terms of solubility. Membrane associated proteins are hydrophobic and can only be solubilized with detergents. RIPA buffer has been widely used for extracting proteins from adipose tissues [3,4,5]. However, the quality of extracted protein in many cases is far from satisfactory. Zakharchenko et al. [5] compared the effect of different extracting buffers on the quality of extracted proteins from breast tissues and showed that the protein bands are somewhat smeared in SDS-PAGE regardless of extraction buffers used. The yield is generally low and in some cases, majority of proteins are lost (Figure below). Lane assignment from left to right: Urea-containing extraction buffer, 1% Triton-X 100, RIPA buffer, 1% SDS followed by precipitation, and 1% SDS extraction (last lane). The SDSPAGE patterns of the extracted protein are generally poor especially the last lane (1% SDS extraction). 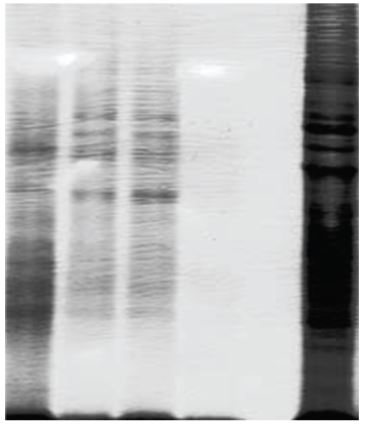 Breast tissue is a fat-rich tissue. The above results simply reflect the pitfalls of extracting proteins from fat tissues. To extract complete protein profile from fat tissue, large amount of detergents is usually applied. However, detergents present in extraction buffer frequently leads to protein sequestration into micelles, resulting in protein loss and poor yield. The presence of lipids in protein sample has a significant impact in band patterns of SDS-PAGE. 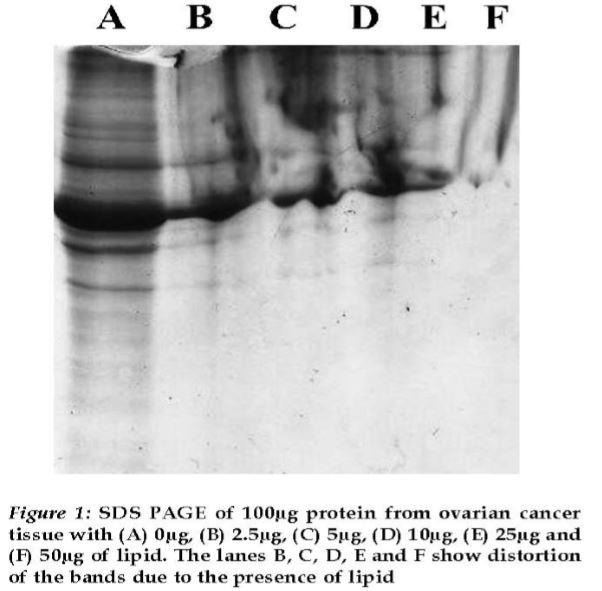 Above figure [6] convincingly demonstrates the relationship between protein band pattern of SDS-PAGE and lipid concentration in protein extracts. In order to overcome the advert effect of
© Invent Biotechnologies, Inc. v1 lipids in the sample, it is necessary to remove as much lipids as possible for a successful protein extraction. In this context, Sajic et al. [2] compared following three detergent-free protocols for extraction of proteins from mouse white adipose tissues: 1). Protein extraction is performed in sucrose density gradient. Isolated proteins are precipitated by trichloroacetic acid (TCA) in acetone overnight at -20oC. 2). Lysate of adipose tissue is extracted by organic solvents (a mixture of chloroform and methanol). Extracted proteins are also precipitated by TCA as described above. 3). Adipose tissues are homogenized followed by organic solvent extraction using TEF and chloroform. The water and chloroform phase are separated by centrifugation and the upper aqueous fraction and the thin interface are removed and dried by centrifuge evaporation. The results indicate that protocol 1 and 2 were found having higher yield than protocol 3, though protocol 2 and 3 only yielded about 1mg/ml. Overall, these methods are relatively tedious and time consuming. Because detergent is not used in the extraction buffer, it is not clear if a complete protein profile can be extracted. It is anticipated that part of detergent soluble proteins may be lost during the processes.

Recently, a Spin-column-based protein extraction method has been developed for adipose tissues (https://www.inventbiotech.com/total-protein-adipose-tissues.php). This approach utilizes a new technology for protein extraction. The tissue is homogenized in a detergent-free buffer. The water-oil emulsion is frozen briefly and passed through a filter cartridge with special surface properties. The function of the filter is to rapidly and clearly separate protein in aqueous phase from oil phase. The extracted total protein is solubilized after lipids are removed from the sample. As shown in following Figure, this approach significantly improved the yield and quality of protein extracts. 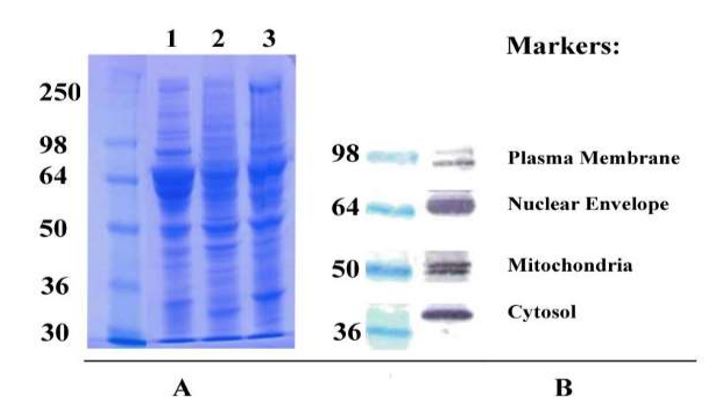 Total protein was extracted from white adipose tissues of porcine (A1), chicken (A2) and rat (A3) and separated by SDS-PAGE. Extracted proteins cover the whole spectrum in protein size distribution ranging from >250 KD to <30 KD indicating high extraction efficiency. Subsequent Western blotting results using rat fat tissue further confirms the completeness of extracted proteins (B). Subcellular compartment markers for plasma membrane, mitochondrial, cytosolic and nuclear © Invent Biotechnologies, Inc. v1 proteins are readily detectable. The results are in clear contrast to protein band patterns using other methods [5]. In addition to cleaner band patterns, the protein yield using spin column-based method is also much higher (2-3 mg/ml). Isolated proteins can be dissolved in any buffer of a researcher’s choice for a particular application. This is the one and the only one commercial kit available for protein extraction from adipose tissues. The availability of this kit is expected to greatly facilitate the proteomic research of adipose tissues in the foreseeable future.