What is the Wnt Pathway?

The Wnt pathway has also been heavily investigated for its role in cancer development as atypical Wnt signalling has been observed as a key player in the initiation of and/or maintenance and development of many cancers, via affecting the behaviour of Cancer Stem Cells (CSCs). Aberrant Wnt signalling pathways has also been linked to other diseases, including familial exudative vitreoretinopathy, Alzheimer’s disease and osteoporosis.

Wnt proteins initiate signalling through binding to Frizzled family receptors which passes the biological signal to the Dishevelled protein inside the cell. Signal specificity may be achieved through cell specific expression of different Frizzled receptors. Currently, three major Wnt signalling pathways have been characterised: the Wnt/Ca2+ pathway the planar cell polarity pathway and the beta-catenin pathway (canonical pathway). All three pathways are activated by the binding of a Wnt-protein ligand to a Frizzled family receptor. 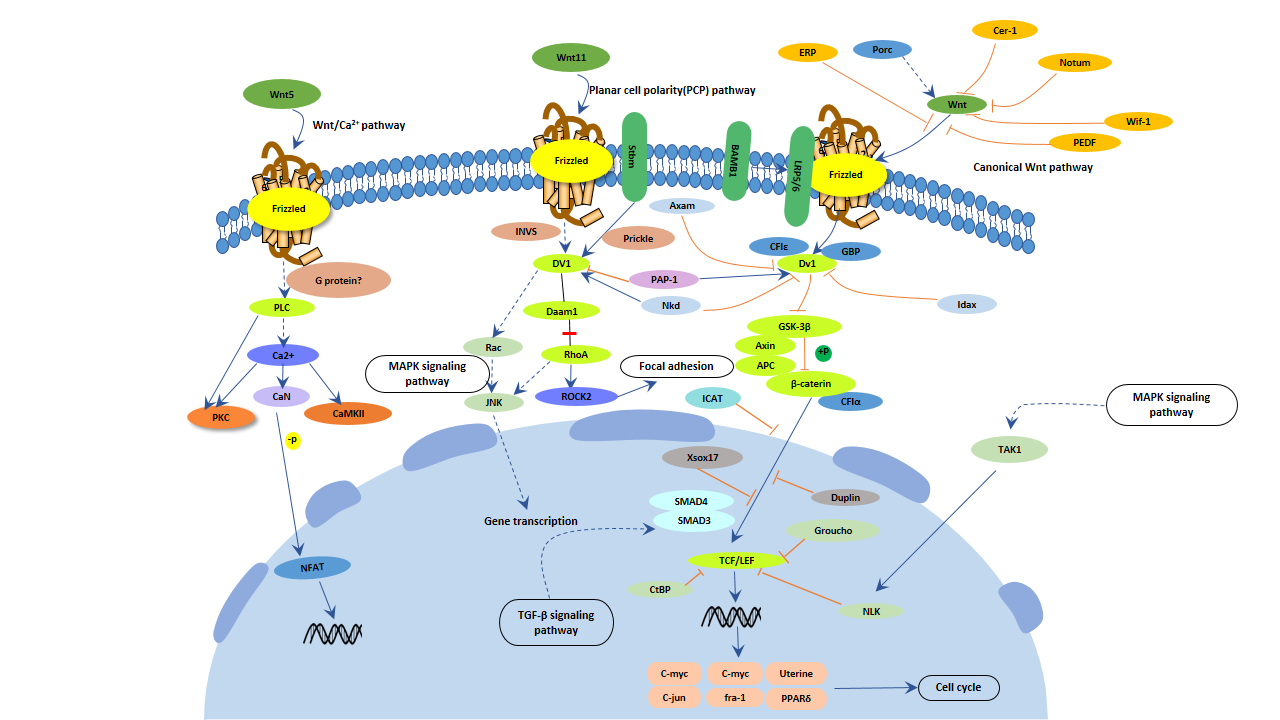 In this pathway, also known as the Wnt/Ca2+ pathway, activation occurs via Wnt5a and Wnt11. Frizzled co-receptors, involved in this pathway include Ror2 and Knypek leading to the release of intracellular calcium. The pathway is also speculated to be mediated via G-proteins and involves the activation of phospholipase C, protein kinase C and calmodulin-dependent kinase II.

As mentioned previously, the Wnt pathways are involved in the control of gene expression, cell behaviour, cell adhesion, and cell polarity. The canonical pathway (β-Catenin-Dependent), also known as Wnt/β-Catenin Signalling pathway can activate the ‘canonical’ Wnt signalling cascade. In this pathway, Wnt signalling inhibits the degradation of β-catenin, which can regulate transcription of a number of genes.

Outside of the nucleus, beta-catenin plays an integral role in cellular polarisation & cell–cell interactions. The pathway activates the transcription of target genes via  stabilization of β-catenin in the nucleus.

The Canonical (β-Catenin-Dependent) Wnt Signalling pathway is the best studied of the Wnt pathways and is highly conserved through evolution. Wnt signalling is activated via ligation of Wnt proteins to their respective dimeric cell surface receptors composed of the seven transmembrane frizzled proteins and LRP5/6. Upon ligation to their receptors, the cytoplasmic protein disheveled (Dvl) is recruited, phosphorylated, and activated.

Activation of Dvl induces the dissociation of GSK-3β from Axin and leads to the inhibition of GSK-3β. Next, the phosphorylation and degradation of β-catenin is inhibited as a result of the inactivation of the “destruction complex”. Subsequently, stabilized β-catenin translocates into the nucleus leading to changes in different target gene expressions. 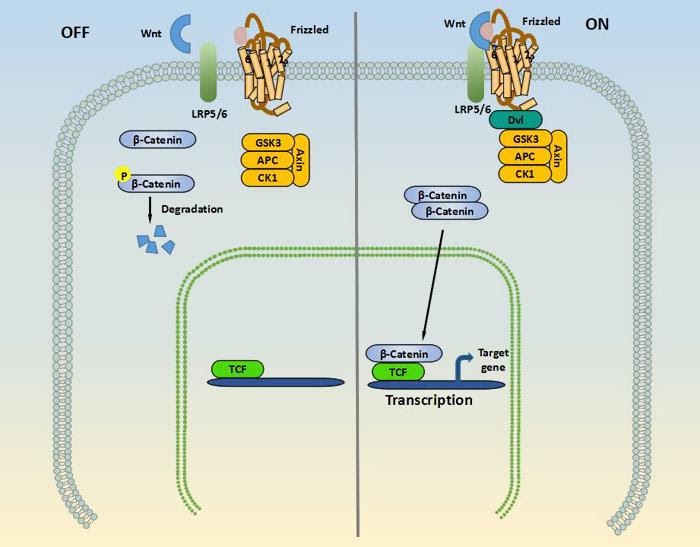 This pathway, also known as the non-canonical Wnt signalling pathway, does not involve β-catenin, unlike the canonical pathway above. Nor does it use LRP-5/6 as its co-receptor and regulates cytoskeletal rearrangement by activation of JNK.

Instead, there are two main receptor complexes which formed at opposite sides of the cell in question. On one side, a complex consists of frizzled, Flamingo/Celsr, disheveled (Dvl), and Diego/Diversin, whereas the other side the complex contains Van Gogh/Vang, Flamingo/Celsr and Prickle. These complexes then interact, which ultimately helps to control the cellular polarisation via activation of JNK/p38 MAPK, small GTPase and Rho-associated kinase (ROCK) signaling. As of the present moment, the role of Wnt in this particular pathway is not fully understood.

Wnt signalling is fundamental to the developmental embryonic maturation of organisms as well as stem cell differentiation, proliferation and development.  The pathway diversifies into three main branches, all three pathways are activated by the binding of a Wnt-protein ligand to a Frizzled family receptor, which transmits the biological signal to the Dishevelled protein inside the cell.

Table 1. the members of Wnt family

Beverly D. Smolich, Jill A. McMahon, Andrew P. McMahon.Wnt family proteins are secreted and associated with the cell surface.Molecular Biology of the Cell,1993,4, 1267-1275.